Verstappen and Raikkonen joined Hamilton on the podium, Vettel recovered from a first lap incident with Bottas to finish fifth. 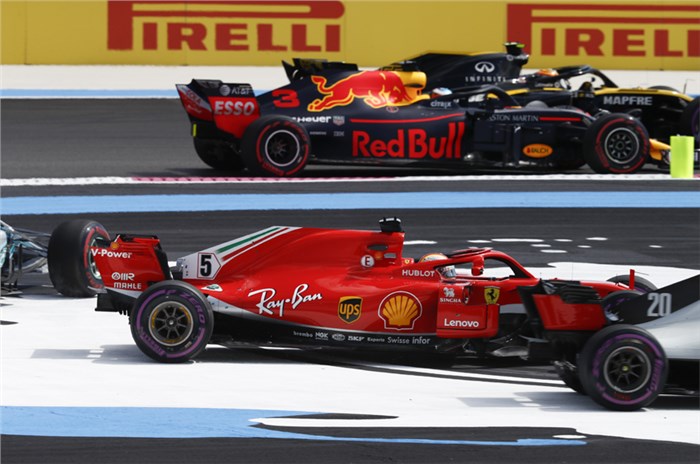 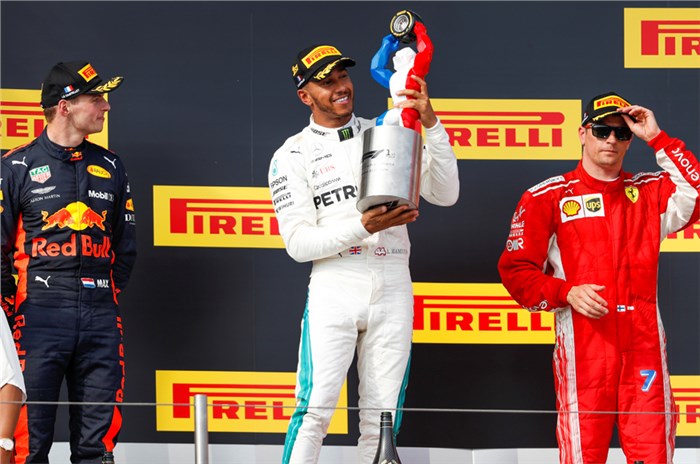 Lewis Hamilton now leads the 2018 Formula 1 drivers’ championship by 14 points from Sebastian Vettel, after taking a commanding victory at the French Grand Prix.

The first French GP to take place in a decade – and the first to be held at the Circuit Paul Ricard since 1990 – saw a chaotic start. Vettel made a good start from third on the grid and drew alongside Bottas on the run into the first corner. But he backed out on the inside only to lock his front-left tyre and make contact with Bottas, spinning his W09. The incident left Bottas with a punctured left-rear tyre and Vettel with a damaged front wing and a five-second time penalty. This promoted Verstappen to second place, while Carlos Sainz took advantage of Daniel Ricciardo’s Red Bull running deep into turn 2, sweeping around the outside to take third place.

The incident-packed opening lap also saw Pierre Gasly and Esteban Ocon retire from their home race after Gasly lost the rear of his Toro Rosso and slid into the back of Ocon’s Force India. This triggered a safety car, under which both Vettel and Bottas headed to the pits, rejoining at the back of the grid on soft tyres.

Hamilton, meanwhile, managed to avoid all the chaos taking place behind him and continued to build a lead from Verstappen once the racing resumed on lap five. He eventually built a big enough lead to join comfortably ahead of Verstappen after his pit stop, only momentarily losing the lead to a longer-running Kimi Raikkonen.

Ricciardo eventually reclaimed third place from Sainz, who lost yet another place when he was passed by Raikkonen, and then Sebastian Vettel. After carving his way through the field, Vettel briefly held third place when Raikkonen and Ricciardo headed in for their respective pit stops. But with Vettel having significantly older tyres, he soon found himself back down in fifth place after being passed by Ricciardo, and then Raikkonen.

Raikkonen closed in on Ricciardo with seven laps to go and after some unsuccessful attacks, finally managed to pass the Red Bull driver into the turn 8 chicane. Ricciardo finished fourth, well ahead of Vettel, who was struggling with tyres but was gifted a free pit stop when Mercedes pitted Bottas for fresh supersofts.

Sainz was running in sixth place in the closing laps before suffering a loss of power with just three laps to go. He managed to hold on to eighth place, but Kevin Magnussen and Bottas were able to slip past him to claim sixth and seventh place, respectively. Sainz’s Renault team-mate Nico Hulkenberg finished just behind him in ninth place. After putting in an impressive performance in qualifying, Sauber’s Charles Leclerc claimed the final points scoring position – his fourth points finish in five races.

Lance Stroll triggered a virtual safety car in the closing laps of the race after his front-left tyre gave up at the high-speed Signes right-hander. Meanwhile, Force India suffered a double retirement after the team’s sole surviving driver, Sergio Perez, had to retire from the race due to a suspected engine problem. Coming off the high of winning the 2018 Le Mans 24 Hours, it was a disappointing race for Fernando Alonso, who ultimately had to pit from last place on the final lap after suffering a rear suspension problem.