Hamilton on pole in Australia

The British driver lead the McLaren front row for the inaugural race of the 2012 F1 season. 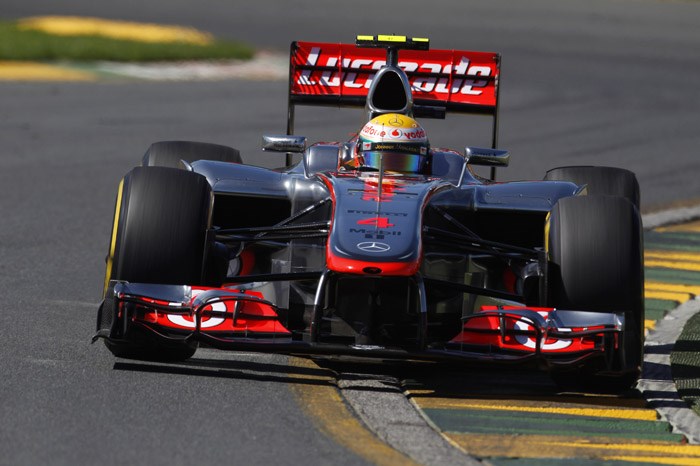 Lewis Hamilton got McLaren's bid to topple Red Bull in the 2012 Formula 1 title race off to a flying start as he took a commanding pole position for the Australian Grand Prix in Melbourne, ahead of team-mate Jenson Button, while world champion Sebastian Vettel was only sixth.

Romain Grosjean took a spectacular third for Lotus on his F1 return, while Michael Schumacher achieved his best qualifying result for Mercedes in fourth, and the Red Bulls had to settle for row three, with Mark Webber outqualifying Vettel.

Further back, Ferrari's fears of an awful start to the campaign came true as neither of its cars reached the top 10, and Kimi Raikkonen's F1 comeback got off to a surprisingly bad start as he was eliminated in Q1.

Hamilton looked assured of pole after his first Q3 run, and although his rivals closed in, none could match his time.

Instead they fought over second place, which changed hands in quick succession in the closing moments as Webber - who chose to do just one Q3 run - Schumacher, Grosjean and finally Button took turns to close in on Hamilton.

Vettel never looked like being a pole contender and his sixth place was his worst qualifying result since he took the same position at Monza in 2010.

Mercedes had appeared like a pole threat as it led the way in Q2, but Schumacher and team-mate Nico Rosberg had to be content with fourth and seventh.

Neither Ferrari got beyond Q2. Fernando Alonso spun into the Turn 1 gravel after his first run in the middle segment, causing a brief red flag. Fifth at the time, he could only furiously watch as others pushed him down to 12th.

But that was still better than Felipe Massa could manage. The Brazilian was a second off his team-mate in both Q1 (which he only just squeezed out of) and Q2, despite having more runs than the sidelined Alonso. Massa ended up 16th.

Raikkonen's disastrous first qualifying session back in F1 was the final big story of the afternoon. The Finn made a mistake on his last Q1 run then backed off thinking he had time for another flying lap, only to run out of seconds and strand his Lotus in 18th.

At the tail end of the Q3 field, Pastor Maldonado gave Williams huge encouragement after its tough 2011 season with eighth place, and Nico Hulkenberg claimed ninth for Force India in his first race back after a year as reserve.

Daniel Ricciardo made sure that both F1's Australians will start from the top 10 as he got his Toro Rosso into the pole shoot-out, although he did not complete a flying lap in Q3. Jean-Eric Vergne only just missed joining his team-mate in Q3, lapping a tenth slower as he secured 11th for his maiden grand prix start.

Sauber's Kamui Kobayashi set a surprise fastest time in Q1, but could not replicate that performance and qualified only 13th. Team-mate Sergio Perez lines up 17th after failing to set a Q2 time due to gearbox problems.

Bruno Senna (Williams) and Paul di Resta (Force India) were outperformed by their Q3-bound team-mates and were only 14th and 15th.

The tail of the field looked much like 2011. Caterham was some way off Q2 pace but clearly ahead of Marussia, while the HRTs failed to make the 107 per cent cut-off time.