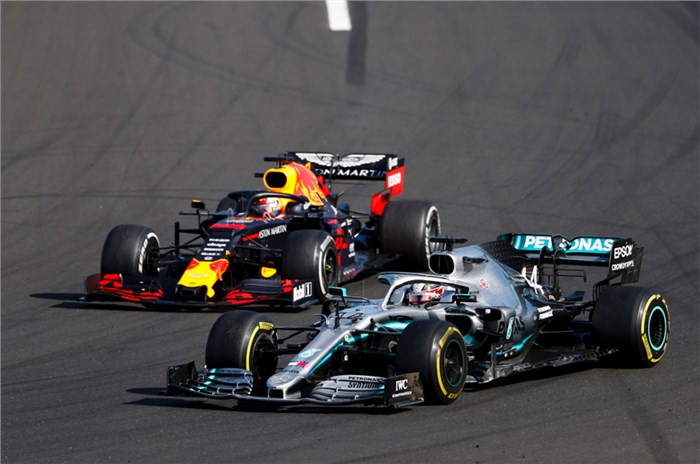 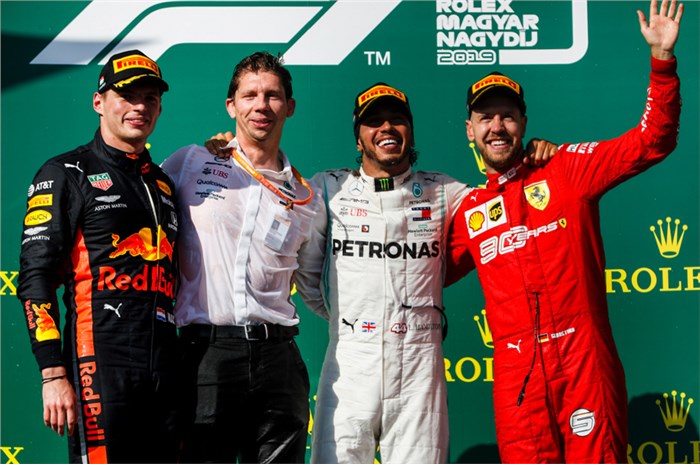 Lewis Hamilton scored his 81st F1 victory after overtaking Max Verstappen, with just four laps to go, to win the 2019 Hungarian GP. The duo was embroiled in a race-long battle, but Hamilton ultimately gained the upper hand after Mercedes opted for a two-stop strategy.

Starting from pole position, Verstappen held on to the lead on the opening lap. Behind him, Hamilton climbed up to 2nd place as his teammate Valtteri Bottas locked up at Turn 2. Just moments later, Ferrari’s Charles Leclerc also managed to overtake Bottas for 3rd place, but Bottas’ car suffered a broken front wing as the two made contact while battling it out. With Bottas losing close to three seconds a lap to Verstappen, Mercedes pitted him for a front wing change, but this dropped him down to the back of the field.

Out at front, Hamilton started chasing Verstappen, but the Red Bull driver was able to hold on to the lead. With both Ferraris well over a pit stop’s distance behind him, Red Bull pitted Verstappen for fresh tyres at the end of lap 24. Hamilton, on the other hand, ran his first stint for six laps longer and by the time he had pitted and re-joined the field, he was just under six seconds behind Verstappen. Taking advantage of his fresh tyres, Hamilton was able to quickly close up to Verstappen within five laps. He launched an attack into Turn 1, but Verstappen successfully defended the inside line. Hamilton then tried to make a move around the outside at Turn 2 but he ran wide and was later asked by his team to back off and cool down his brakes.

Just when it seemed like Verstappen had some breathing space, Mercedes took a gamble and pitted Hamilton again, this time putting on a set of medium tyres. When he re-joined the field, he was 20 second adrift of Verstappen with 20 laps to go. He put in some blistering laps and with six laps to go, the gap was down to just five seconds. Moments later, Verstappen started complaining about his tyres having no grip. Hamilton managed to get into DRS range just two laps later, and made a race-winning move around the outside at Turn 1, to take the race lead. Verstappen did bag one additional point for setting the fastest lap after switching to soft tyres for the final three laps.

Behind the leading duo, Ferrari had a rather lacklustre race – both cars severely lacking pace when compared to Mercedes and Red Bull. Vettel was able to make a two-stop strategy work in his favour. After running a longer first stint, he switched to soft tyres and started hunting down his teammate Leclerc. With just under three laps to go, he passed Leclerc down the inside at Turn 1 to clinch the final podium spot.

Carlos Sainz, who had overtaken his teammate Lando Norris at the start of the race, took a strong 5th-place finish for the second consecutive time to collect more points for McLaren. Pierre Gasly finished 6th, followed by Kimi Raikkonen. Meanwhile, Bottas was only able to salvage an 8th-place finish after his opening lap mishap. Norris finished 9th after being forced to take a late-race pit stop, while Alexander Albon wrapped up the top 10.