Lewis Hamilton extended his lead in the Formula 1 world championship to a commanding 24 points by beating main rival Nico Rosberg. 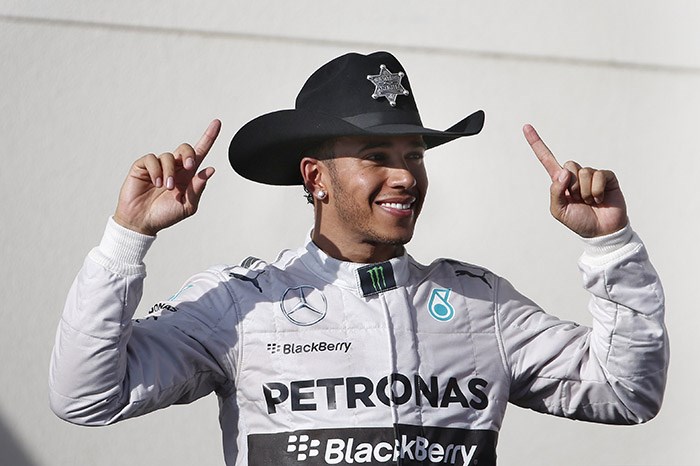 Lewis Hamilton extended his lead in the Formula 1 world championship to a commanding 24 points by beating main rival Nico Rosberg to victory in the US Grand Prix.

Having taken a brilliant pole position on Saturday, Rosberg narrowly led Sunday's F1 race at Austin through the first round of pitstops, as Hamilton nursed a set of soft Pirelli tyres that he flat-spotted during qualifying.

The German seemed less comfortable than Hamilton when they switched to the medium compound tyre though, and his Mercedes team-mate pounced to take the lead by using DRS and diving down the inside under braking for Turn 12 on lap 24 of 56.

Thereafter Rosberg was powerless to prevent Hamilton clinching his 10th grand prix victory of the season - the 32nd of his career, making him the most successful British driver in the history of the sport.

The Australian's slow getaway from fifth on the grid cost him four places initially, but he climbed back up to sixth before the end of the opening lap, when the safety car was deployed after Sergio Perez's Force India bounced off Kimi Raikkonen's Ferrari and into Adrian Sutil's Sauber.

Ricciardo dived past Fernando Alonso's Ferrari to take fifth at the restart, before jumping both Williams at successive pitstops to climb to third.

The Williams drivers finished fourth and fifth, Felipe Massa coming home ahead of team-mate Valtteri Bottas after jumping him at the start.

Ricciardo's Red Bull team-mate Sebastian Vettel gambled on a pitlane start and low-downforce settings, after exceeding the five-engines-per-season limit at this race.

The reigning world champion found it difficult to make progress initially, but climbed as high as sixth before being passed by Alonso's Ferrari (on a much fresher and softer set of tyres) in the closing stages.

Vettel then plummeted to 14th place after making a late stop for fresh rubber, but recovered back to seventh as the cars ahead battled to the end on much older rubber.

The McLaren of Kevin Magnussen succumbed on the final lap and thus finished eighth, while Lotus scored its first points since May's Monaco GP as Pastor Maldonado finished 10th.

The Venezuelan passed Jean-Eric Vergne's Toro Rosso for ninth on the final lap, but was bumped back by his second five-second penalty of the race, in this case for pitlane speeding.

Vergne was classified ninth, but is under investigation for hitting Romain Grosjean's Lotus while lunging down the inside at Turn 1 with six laps to go.

Both Vergne and Maldonado received earlier five-second penalties for speeding behind the safety car.

Grosjean finished 11th on the road, ahead of the second McLaren of Jenson Button, which fell away badly in the closing laps.

The 2007 world champion finished a disappointing 13th, ahead of the Sauber of Estaban Gutierrez and the second Toro Rosso of Daniil Kvyat, last of the classified finishers.