Vettel now trails Hamilton by 40 points in the drivers’ championship after finishing 3rd at Singapore. 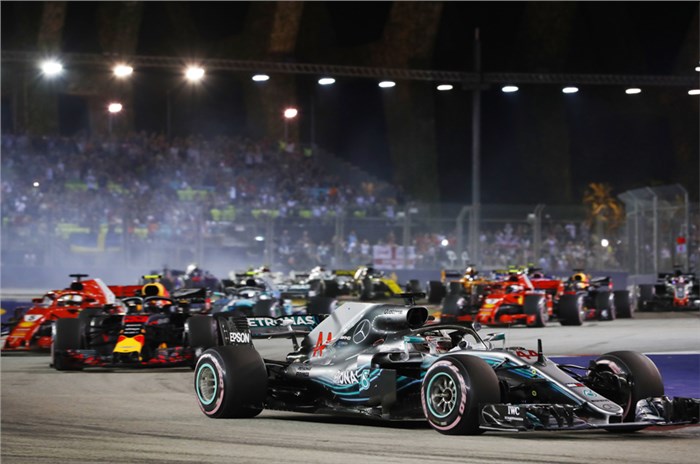 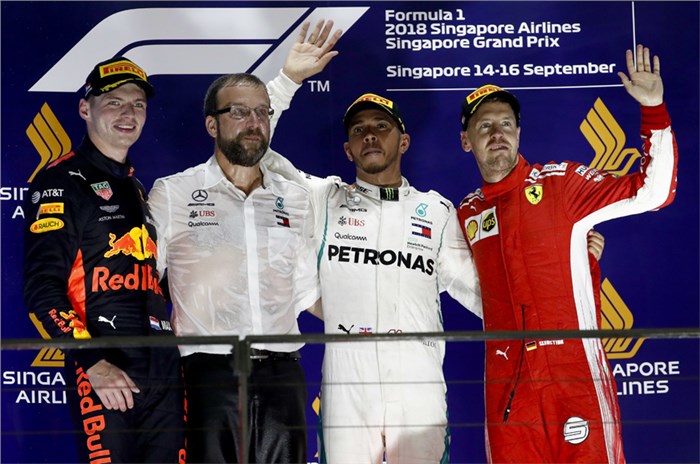 The opening lap saw both Force India cars make contact after Sergio Perez nudged his team-mate Esteban Ocon into the wall at Turn 3, eliminating him from the race and bringing out the safety car. However, Vettel managed to pass Verstappen for 2nd place on the outside into Turn 7, just before the Safety Car was deployed. Meanwhile, Hamilton had a clean start from pole and remained virtually unchallenged for the rest of the race.

Racing resumed on lap 4 but the frontrunners were running cautiously to extend the first stint on the hypersoft tyres as far as possible. Ferrari decided to attempt an undercut and pitted Vettel on lap 14, switching to a set of ultrasofts. This strategic call ultimately proved to be costly for the team as Vettel spent two laps bottled-up behind Perez and ultimately ended up losing position to Verstappen.

Hamilton and Verstappen switched to the soft tyres with a clear strategy of running to the end with no further stops. The initial pit-stop phase left Hamilton with a 3sec lead over Verstappen once Ricciardo became the last of the frontrunners to change tyres, on lap 27.

The drivers starting outside the top 10 with a free tyre choice benefitted, as some of those ahead on softer rubber pitted first – Perez, Nico Hulkenberg and Romain Grosjean emerging behind the tail-end Williams duo of Lance Stroll and Sergey Sirotkin after their pit-stops. This prompted the race's second significant incident when Perez grew impatient with Sirotkin and swerved at him as he finally went past at Turn 17 on lap 33, picking up a puncture in the process and enabling Hulkenberg to nip through.

As Grosjean tried to follow Hulkenberg through, the pair held up Hamilton as he came up to lap them, briefly enabling Verstappen to enter attacking range. Once clear, though, Hamilton once again opened up his lead, ultimately winning the race 8.9sec clear of Verstappen. Vettel nursed his ultrasofts past the chequered flag a further 30.9sec behind.

A battle for 4th place erupted in the closing laps as Ricciardo closed in on and challenged Raikkonen who, in turn, crept up on Bottas. Nothing came of it, though, and Bottas crossed the line in 4th place.

Alonso benefitted from a long first stint on ultrasofts, gaining  track position at the expense of Perez and Grosjean. He then undercut Sainz for 7th place when he made his single stop on lap 38. Charles Leclerc followed Sainz home in 9th place, with Hulkenberg rounding up the top 10.

Hamilton’s Singapore GP victory has helped him extend his lead in the drivers’ championship standings to 40 points over Vettel, with just six races remaining. The race delivered another blow to Ferrari’s hopes for a title at a circuit that had, until now, proved to be a challenge for Mercedes in F1’s V6 turbo-hybrid era.