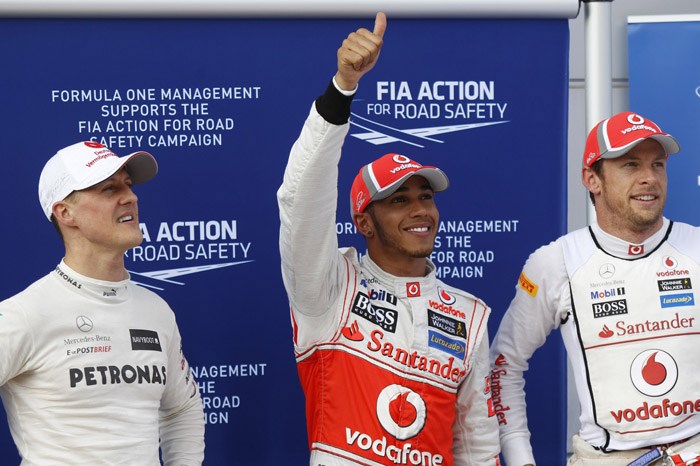 Lewis Hamilton and Jenson Button maintained McLaren's 2012 qualifying superiority as they repeated their Melbourne grid result and filled for the front row for the Malaysian Grand Prix.

Michael Schumacher produced the best qualifying performance of his Formula 1 comeback as he took third for Mercedes, while world champion Sebastian Vettel chose to run the harder tyre and will start fifth for Red Bull.

Just as had been the case in Australia, Hamilton's first pole shot in Q3 was sufficient to secure the top spot, as his 1m36.219s proved unbeatable.

Button was second fastest after those runs, but was pushed back by Schumacher. Mercedes had left it late in Q2 and looked in danger of being eliminated before surging into the top 10, and then went for just one run in Q3.

That meant Schumacher was back in the pits by the time Button launched his retaliation, the McLaren edging the Mercedes off the front row by just 0.023 seconds. Schumacher beat his team-mate Nico Rosberg by five places and a little under 0.3s.

Red Bull was not a pole threat again - Q1 pacesetter Mark Webber qualifying fourth, and Vettel choosing the harder Pirelli and setting the sixth-quickest time. They were split in the results by Kimi Raikkonen, but the Lotus - which was fastest in Q2 - will drop to 10th on the grid due to its five-place penalty for a gearbox change. Raikkonen's team-mate Romain Grosjean was seventh quickest.

Against the team's own expectations, Fernando Alonso got Ferrari into Q3 - although he could only manage to beat Sergio Perez's Sauber to ninth. Felipe Massa was closer to Alonso's pace than he had been for most of the Melbourne weekend but he missed the Q2 cut and was 12th.

Several of the underdog stars of Melbourne qualifying fell back into the midfield in Malaysia. Pastor Maldonado briefly got into the top 10 despite an early trip through the gravel in Q2, but he was pushed back to 11th as the Mercedes delivered their late laps. Maldonado will start two places ahead of Williams team-mate Bruno Senna.

There were no Force Indias or Toro Rossos in Q3 this week either. The closely-matched Paul di Resta and Nico Hulkenberg claimed 14th and 16th for Force India, just 0.013s apart and split by Daniel Ricciardo, whose Toro Rosso team-mate Jean-Eric Vergne locked-up in Q1, flat-spotted a tyre and consigned himself to 18th. Kamui Kobayashi's Sauber brought up the rear of the Q2 pack.

Both HRTs made the 107 per cent cut this time, and will not even start last, as Heikki Kovalainen's penalty for passing under the safety car in Australia will drop the Caterham from 19th to last.