The 2008 World Champion halted Red Bull's run of qualifying dominance with a dominant pole position at the Yas Marina Circuit. 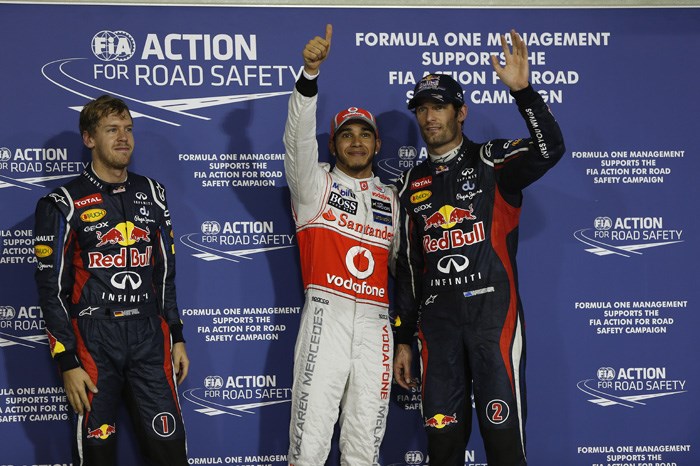 It was a disappointing qualifying session for both Formula 1's title contenders, with Sebastian Vettel only third behind Red Bull team-mate Mark Webber - but far better off than his Ferrari rival Fernando Alonso, who lines up only seventh.

McLaren driver Hamilton had been quickest in two of the three Yas Marina practice sessions, led Q1 and Q2, then produced a 1m40.630s early in Q3 to immediately put himself 0.4 seconds clear of his opposition.

A second pole shot might have been faster still, but once it became clear that Hamilton's rivals had no answer to his pace, the Briton backed off and pitted.

Webber's 1m40.978s pushed Vettel off the front row. The points leader, hampered by a substantial loss of practice mileage, had pushed hard throughout qualifying - brushing a barrier in Q1, flying over kerbs in Q2, and then stopping on track after his unsuccessful final flying lap in Q3.

Pastor Maldonado delivered the strong Williams qualifying result he had promised by grabbing fourth on the grid.

Kimi Raikkonen improved to fifth for Lotus on his second Q3 run, with Jenson Button making similar gains to take sixth. Button had been as low as ninth at one stage, but a five-place and 0.6s gap to McLaren team-mate Hamilton will not please the 2009 champion.

Alonso held fourth after the early Q3 runs, only to be shoved down to a potentially costly seventh as others improved. His team-mate Felipe Massa starts ninth, ahead of Romain Grosjean's Lotus.

Nico Rosberg made just one run in Q3 and initially held fifth, before falling to eighth when his rivals came out again. Rosberg's performance was a boost for Mercedes on what had looked like being another disappointing weekend. His team-mate Michael Schumacher was only 14th, amid mutual apologies from team to driver over the radio.

Force India and Sauber could not reach the top 10 this time. Nico Hulkenberg and Sergio Perez filled row six, with Paul di Resta 13th in his new chassis and Kamui Kobayashi six tenths down on Perez in 16th after locking up on his last lap.

Having appeared to conquer his qualifying problems in the summer, Jean-Eric Vergne notched up his second straight Q1 exit - and his eighth of the year - in Abu Dhabi. The recently re-signed Toro Rosso driver was on course to make the cut before spinning. He pushed on for another lap, but his abused tyres had no more pace to offer. Vergne's team-mate Daniel Ricciardo brought up the rear of the Q2 field in 17th.

Marussia pushed Caterham hard in the battle at the tail of the field. Although Heikki Kovalainen emerged in front again, he was only a tenth ahead of Charles Pic.

Vitaly Petrov was right in the fight in the second Caterham too, but Timo Glock was puzzled by a relative lack of speed from his Marussia as he beat only the back-row dwelling HRTs.