It was the 24th pole of the McLaren driver's Formula 1 career, and the third in four races. 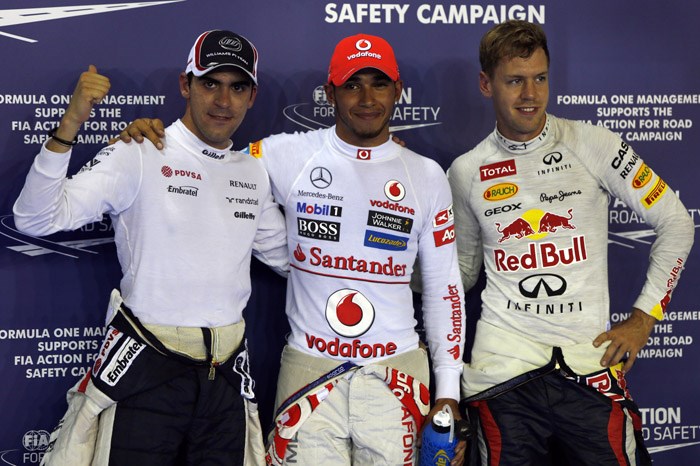 Lewis Hamilton secured pole position for the Singapore Grand Prix with a brilliant lap of 1m46.362s, ahead of Williams driver Pastor Maldonado.

It was the 24th pole of the McLaren driver's Formula 1 career, and the third in four races as he put down the rising challenge of Sebastian Vettel and Red Bull, who had set the pace throughout the weekend until qualifying.

It wasn't all plain sailing for the Briton, who brushed the wall on his quick lap - though apparently without damage.

But it won't be the world champion Vettel who starts the grand prix at Marina Bay on the front row, as perhaps was expected, but Spanish Grand Prix winner Maldonado, who delivered a stunning (and surprising) lap to go second fastest ahead of Vettel.

Jenson Button was fourth fastest ahead of points leader Fernando Alonso and Paul di Resta in the rapid Force India. Mark Webber was seventh fastest for the moment, but that may change as the Australian is under investigation for allegedly impeding Timo Glock during Q1.

Romain Grosjean, with what might have constituted the scruffiest lap of the season, was eighth fastest ahead of the two Mercedes of Michael Schumacher and Nico Rosberg, who both declined to set a laptime in Q3.

Grosjean, having set the fastest time of all in Q1, also tapped the wall with the rear of the car at Turn 14 at the beginning of Q2. The Lotus driver bounced back from his shunt though to go fourth fastest in Q2, behind Hamilton, Vettel and Webber.

He wasn't the only one in the wall in that session. Bruno Senna hit the retainers at the penultimate corner, the same place he'd brushed in Q1, but this time he damaged his suspension and, unlike the Frenchman, would take no further part.

It was the third time the Brazilian had been in the barrier over the weekend - and he starts Sunday's race 17th.

Hulkenberg, Raikkonen and Massa in particular might have expected to progress further, but late laps from the Mercedes duo put paid to their hopes.

With speculation surrounding Vitaly Petrov's future at Caterham, he put in a tremendous effort in Q1. For most of it he looked like he might outqualify Toro Rosso's Vergne and Sauber's Kamui Kobayashi on merit to move into the second session.

But both of those drivers would eventually move ahead of the Russian, who lines up 20th for the race ahead of his team-mate Heikki Kovalainen, as the Toro Rossos injected some super-soft pace at the crucial moment (Ricciardo was seventh fastest overall in Q1!).

Kobayashi however was the star scalp dropped early as he was already in the pits when the Toro Rossos fired up the afterburners. The Japanese, let us not forget, was on the front row at Spa.

Also worth mentioning was the fact that Narain Karthikeyan outqualified HRT team-mate Pedro de la Rosa for the second time in a row, and by nearly a second, as the pair occupied the last row of the grid.