Gill ended the 2018 INRC on a high note, wrapping up the title after taking a commanding victory at the Popular Rally in Kerala. 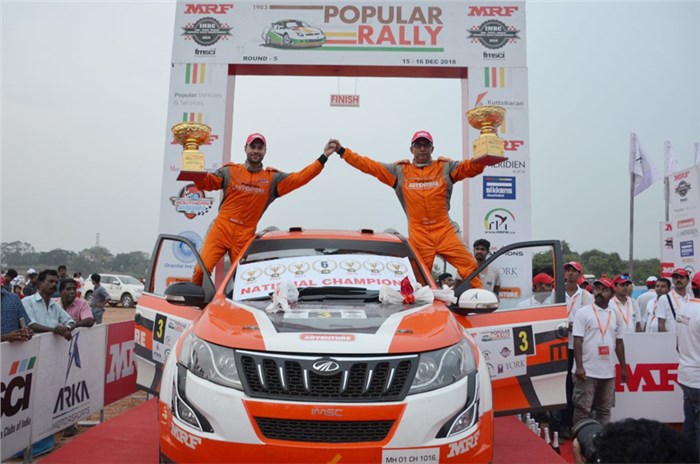 Rally ace Gaurav Gill secured his sixth Indian National Rally Championship (INRC) title after winning the Popular Rally in Kerala – the fifth and final round of the 2018 MRF FMSCI INRC.

Driving for Mahindra Adventure, Gill along with his co-driver Musa Sherif was initially 3rd in the overall standings after the 2018 Coffee Day India Rally, having suffered retirements in Arunachal and Chikkamagaluru. But with the new N1 rule allowing drivers to drop their lowest scores, he entered the final round on top of the standings, albeit just one point ahead of his teammate Amittrajit Ghosh.

After starting off more cautiously and finishing the first two stages in 2nd place, Gill quickly got a feel of the terrain and went on to take a commanding victory after winning seven stages.

“It was a difficult year for us, especially towards the end, due to mechanical issues which were beyond our control,” said Gill. “Kochi was the most difficult, with narrow roads which were fast and had broken tarmac, too. We had to push extra hard to stay ahead of the others.”

“It was a great year for us compared to last season,” said Ghosh. “The championship just gets more and more competitive, which is great for the sport. The beginning of the season was really good but we hit issues from Chikmagalur and were really hit by the lack of pre-event testing and wrong set up choices in Kochi.”

Behind Gill, Race Concepts Motorsport’s Younus Ilyas took 2nd place in the Popular Rally, followed by Arka Motorsports’ Karna Kadur, who had already wrapped up the INRC 2 title in the previous round. Meanwhile, Dean Mascarenhas took top honours in the INRC 3 category, driving for Chettinad Racing.