This was Gill’s fifth win at the event, this time by a margin of almost four minutes. 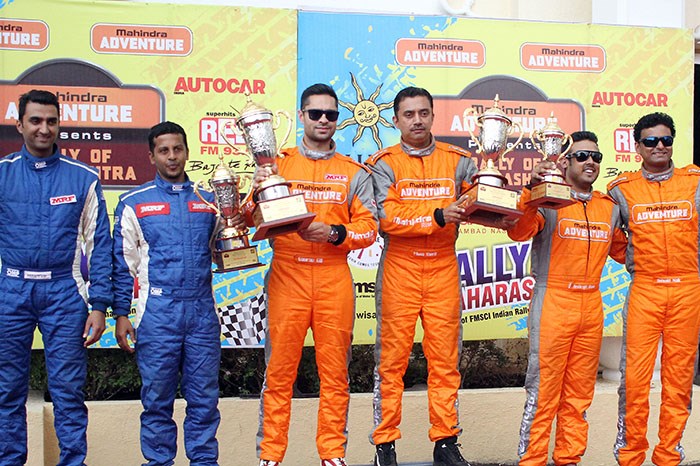 This was Gill’s fifth win at the event, this time by a margin of almost four minutes.

Ghosh and Aroor were tied going into the final run of the Spectator Special Stage. “I just didn’t think how much time I had to make up, but drove the car to its limits. I am extremely happy that I managed to make one place to finish second,” said Aroor.

Gill was obviously happy with his work, “I just love the Rally of Maharashtra. The special stages are very technical and fast which suit my driving style.

“Obviously, it is great to start the domestic season on a winning note and we hope to carry forward the momentum,” he added.

Finishing behind the top three was Mysuru’s Lohitt Urs (Srikant Gowda) in a Mitsubisihi EVO VIII that arrived in Nashik barely hours before the rally commenced.

“Our spares and tyres came only after we completed the first loop of the stages on Friday. Until then, we were running on street tyres with just 50 litres of fuel to play with. It was tough, but we will do much better in the remaining four rounds of the IRC,” said Urs who came back to rallying after a year’s break.

“We had an excellent outing here in Nashik. Hopefully, we will continue to perform for the rest of the season. The car was superb and so were the Yokohama tyres,” said Kanthraj.

Topping the IRC 1600cc class was 21-year old Dean Mascarenas from Mangaluru and co-driver Sudipta Padival in a Volkswagen Polo.

“We are extremely happy to have won the title here and a great start to the new season. We had no issues with our car and except for the mistake in the Spectator Special Stage when I crashed into the barriers, everything was just perfect,” said Mascarenhas.

In the FMSCI 1600 Cup, Dhruva C (Jeeva Rathinam) took the honours in the Honda City, as he easily held on to a big overnight lead.