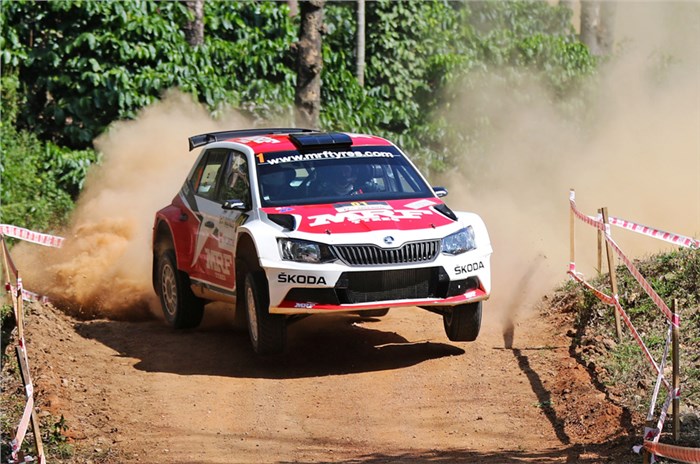 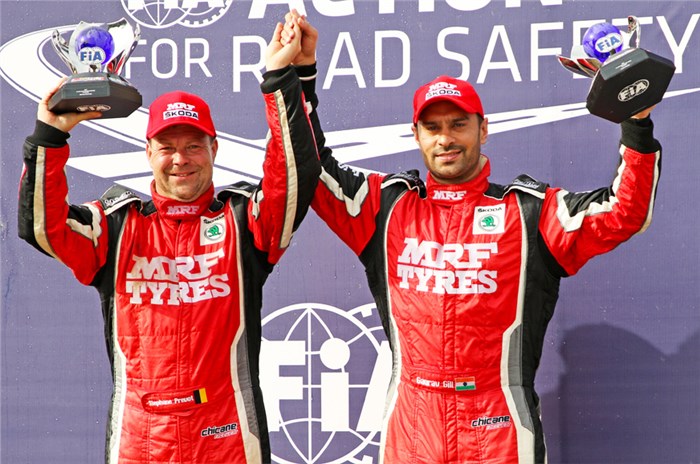 India’s Gaurav Gill came up with a mature drive to retain the FIA Asia Pacific Rally Championship title – his third since 2013. In Chikmagalur, he led a 1-2 Team MRF sweep in the Coffee Day India Rally 2017. He was ahead of teammate Ole Christian Veiby from Norway by 17min 38.4sec.

The Coffee Day India Rally, organised by Motor Sports Club of Chikmagalur, doubled up as the fifth and concluding round of the 2017 APRC. Going into the Rally, 35-year old Gill and co-driver Stephane Prevot of Belgium led Veiby (Stig Rune Skjarmoen) by six points with both requiring a win to clinch the title. When the 21-year old Norwegian suffered mechanical problems yesterday and lost time, Gill cruised to another win.

The victory was worth 38 points which took Gill’s tally to 174 while Veiby finished on 160. While the Indian ace won three of the five rounds, Veiby triumphed in the other two as MRF Tyres bagged the team championship, while Skoda yet again took the manufacturer’s trophy. It was also Gill’s 17th win in APRC since his debut, in 2008.

Enjoying a commanding 15-minute lead overnight, Gill did not feel the need to push hard and yet won one of the day’s four Special Stages while Veiby continued his charge to move from the third to the second spot.

Meanwhile, Abhilash PG, having completed all the Stages in third place today, retired during the transport run due to mechanical problems to the finish fourth, thus promoting Sri Lankan Shafraz Junaid (Akhry Ameer) to third.

Reflecting on his victory and the third APRC title, Gill said: “Obviously, I am extremely pleased to win such a hard-fought championship. My satisfaction lies in the fact that I beat my teammate OC (Veiby) who is a World Championship driver and even won the round in Poland. More importantly, this victory is for Indian motorsport and it showed that India is capable of competing with the best talent in the World."

“For me personally, it satisfying to win three APRC titles despite the fact that I get to drive just five or six rounds in a year and not as much seat time in the rally car as my teammate," he goes on to say. "OC, for instance, is a factory test driver for Skoda and also participates in the World Championship besides other rallies. So, for me to beat him despite the odds I face, is especially satisfying."

On being asked about his future, he said, “Looking ahead, I think I have done enough to show that I have the pace and ability to compete at the World-level as my first APRC title in 2013 was against my then teammate Esapekka Lappi from Finland who today is a regular in the World championship with several wins. At the moment, I accept what is on offer without thinking too much about what is in store for me in my rallying career.”

For APRC debutant Veiby, it was disappointing outing at this point and felt that he could have done much better than finishing second in the championship, but said he benefitted by competing against Gill. “Yeah, for sure, I could have had better results on my debut in APRC this year. I had mechanical issues with my car in three of the five rounds. However – it was fun competing with Gaurav and I think I learnt a lot. Overall, it was a great experience, driving in different conditions, terrain and countries,” said Veiby.