Formula E: Mahindra Racing on the podium in Paris ePrix

German driver Nick Heidfeld picked up where he left off just seven days ago with a solid run to third place. 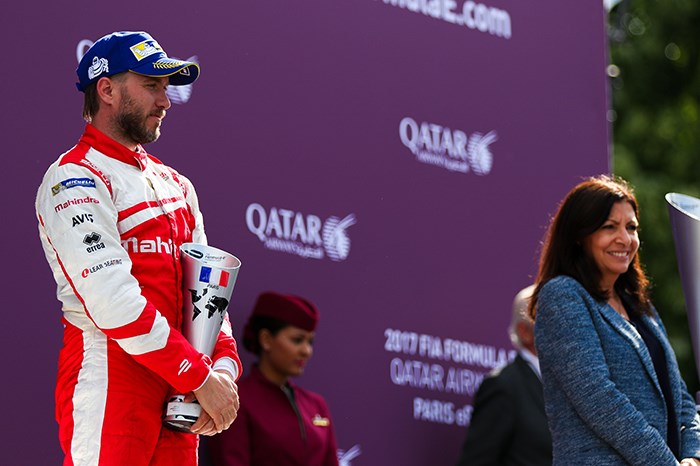 Mahindra Racing Formula E team has scored back-to-back podiums and its best-ever double points finish with a great team performance in at the Paris ePrix.

German driver Nick Heidfeld picked up where he left off just seven days ago with a solid run to third place, just one position ahead of his Swedish teammate Felix Rosenqvist. The combined team result represents an improvement over last weekend’s Monaco ePrix when the drivers took third and sixth respectively.

All four of the team’s M3Electro racecars performed faultlessly throughout the 49-lap race around the Les Invalides street circuit, offering superior energy efficiency while matching the pace of the race leaders.

After both drivers qualified just shy of the series’ Super Pole shootout session in sixth and seventh, they started the race in fifth and sixth following a ten-place grid penalty for competitor Oliver Turvey.

Heidfeld immediately jumped from fifth to fourth on the opening lap, with Rosenqvist following suit to overtake Esteban Gutierrez not long after. A collision down the field forced early pit stops for most drivers.

The Mahindra Racing pair successfully swapped to their second cars to emerge in the same order as before and in the perfect position to capitalise when Jean-Éric Vergne collided with the temporary concrete barrier.

The team’s performance in Paris was made extra poignant in front of popular Indian actress Gul Panag, who was a special Mahindra Racing guest this weekend. Gul had a taste of Formula E action herself recently with a test drive of the upcoming M4Electro.

Today’s podium, the team’s fourth of the 2016-17 FIA Formula E Championship, allows Mahindra Racing to close the gap on ABT Schaeffler Audi Sport in the teams’ standings with just six races left to run.

Dilbagh Gill, Team Principal, Mahindra Racing Formula E Team said, “At the halfway mark of the championship, I think we are back where we needed to be! It’s satisfying to be solidly in third position in the teams’ standings because that has been the aim for us from the beginning of the season”

Podium finisher Nick Heidfeld added, “It’s great to have two podiums in a row! This is one of the best circuits of the season and you simply cannot beat the surroundings. It was another exciting race and the good thing is that we were a lot more competitive than we were in Monaco. It was nice to see that I had similar pace to the leaders and had a lot more energy available”.