Paul di Resta put the new Force India VJM06 through its paces at the British track after the launch. 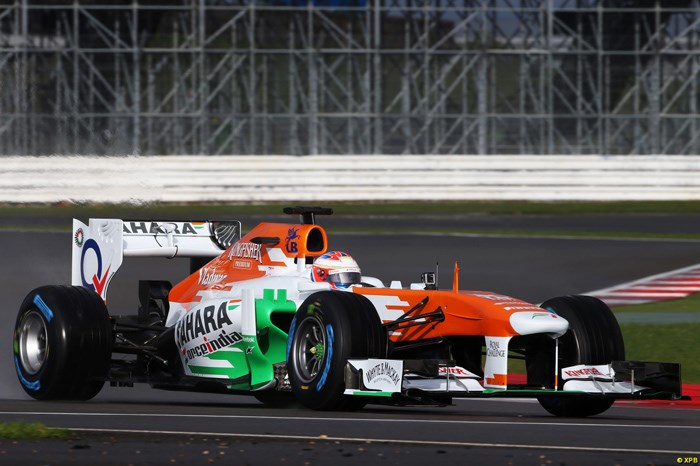 Force India launched its 2013 car on Friday morning, becoming the fourth Formula 1 team to unveil its single-seater for the upcoming season.

The Silverstone-based squad finished the 2012 season seventh in the constructors' championship, but was one of the strongest teams towards the end of the year, with Nico Hulkenberg fighting for victory in the Brazilian Grand Prix.

"I've pushed the guys quite hard in areas that's outside their comfort zone," said technical director Andrew Green. "It is under the skin, you can't see it from here: rear suspension, front suspension, aerodynamics have all been pushed hard.

"I think the guys have done a really good job over the winter and the car is a step improvement from last year. The car should be a lot more consistent, should be a lot easier to drive. We're looking forward to Jerez to see whether it does what it says on the tin."

Hulkenberg has moved to Sauber for 2013, and Force India is yet to announce who will partner Scot Paul di Resta during the upcoming season.

Frenchman Jules Bianchi had been strongly linked with the drive, but the Frenchman was in Maranello during the launch of the new Ferrari F138.

The new VJM06 car will be powered by Mercedes engines for the fifth consecutive season and it will take to the track today at Silverstone before it starts testing at Jerez next week.

"I'm eager to feel what the car is all about. We're giving it a short test today to get a bit of an idea," said di Resta, who admitted it was hard to make predictions for 2013.

"I think it's difficult to set yourself targets, especially at this point. It's consistency and working the momentum to carry over from last year.

"That's the focus, to have a car that gets into Q3 and put ourselves into strong positions."