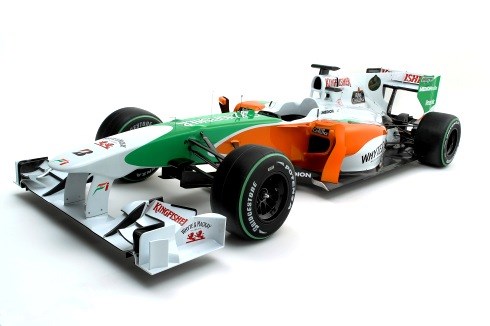 Force India boss Vijay Mallya says his team is aiming to score "more points and more podiums" in the 2010 season following a promising 2009.

As Force India unveiled its 2010 challenger, Mallya stated more ambitious goals for the upcoming season. "Our goal is to continue on the same path of performance improvement that we had at the end of 2009," said Mallya.

"I don't think I am being over-proud when I say 2009 was an exceptional year for us. The bare statistics say it all: one podium, one pole position, one fastest lap, a further five top 10 starts and 13 points. "We've learnt from our experiences and we've come out a better team: resilient, resourceful and now resurgent. I hope 2010 will see this great progress carrying forward.

"We've got one podium so far but I would hope that, this time next year, I'm talking about more points and more podiums. I'm confident we can get this, why not aim high?'

The team's design director Mark Smith said the new car is an evolution of the machine that enjoyed a strong second half of the season last year.

"The VJM03 is definitely an evolution of the VJM02 in terms of the design philosophies we have developed at Force India over the last year," Smith said. "We are very happy with the direction, therefore we have opted to evolve the car rather than significantly revise.

Smith is also hopeful the new car will be competitive on most types of tracks, unlike last year's VJM02, which struggled on high-downforce circuits.

"The VJM02 was a relatively low drag car that showed well on the low downforce tracks," he added. "As was demonstrated throughout 2009, that was a useful attribute but as we go into 2010 we have tried to maintain a high level of aerodynamic efficiency, but we recognise that our championship position will be enhanced by a general level of performance that is suited to all types of circuits. We have, we believe, quite an efficient car overall."