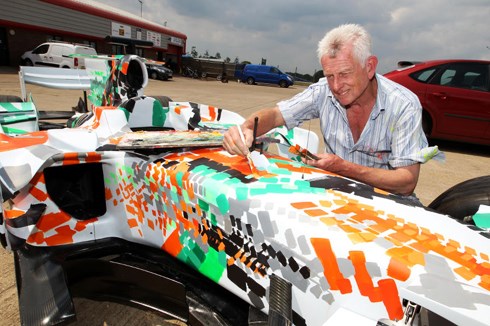 The car, which the team claims to be the fist F1 single-seater painted by hand, will be auctioned off to raise funds for charity later this year.

"Seeing one of my Formula 1 cars transformed into a painting is a wonderful initiative that combines two of my greatest passions: cars and art," said team boss Vijay Mallya.

"I wish to thank Dexter for producing this exquisite piece of work, which I am sure will be of great interest to art collectors around the world, and will raise valuable funds for charity."

Brown added: "When I was approached by Erik Meijer to paint an Art Car, I was immediately excited by the project. Of course, it's not the first car I've painted, but it's the first time I've had the chance to work with a modern Formula 1 car.

"The last car I painted was a BMW in Genoa in 1993, but the Formula 1 car was a different challenge because I had to work around the complex bodywork. It's great to be involved in such a unique project and I look forward to seeing the reaction of the public."

The Art Car will be auctioned later this year after the inaugural Indian Grand Prix. The funds raised will be split between Great Ormond Street Hospital for Children and Force India's Academy, which gives youngsters in India the chance to get involved in motorsport.