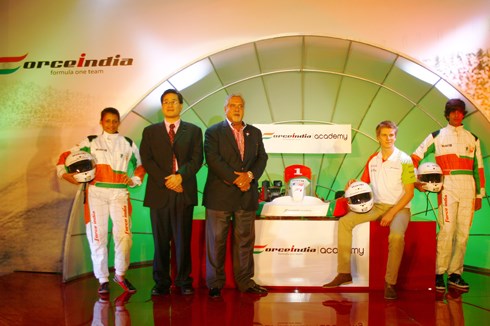 After making its presence felt at the top echelon of motorsport, the Force India Formula 1 team announced the launch of the Force India F1 team academy- a programme aimed at identifying and nurturing young racing talent from India ultimately leading to a Formula 1 race seat with the Indian team.

Unveiled in Bangalore with Force India reserve driver Nico Hulkenberg present, the initiative does not only aim at creating a pool of young driving talent but also has provisions to provide specialised academic and vocational training requisite for a career in motorsport for those aspiring to be race engineers and other motorsport personnel critical to running the show behind the scenes.

Dr. Vijay Mallya, chairman and team principal, Force India F1 said, “ Like the Force India F1 team, this academy is a historic milestone in the Indian sports arena as no one has embarked on such an ambitious programme to create a pool of talent and groom aspirants who show exceptional promise by providing them the necessary corporate funding backed with a crystal-clear professional career path in motorsport so that one day, they can go on to represent India in the international arena and hopefully bring glory to the nation.”

Being launched in a partnership with ExxonMobil, the academy in its first year will focus on unearthing driving talent via the ‘One from a billion hunt’ which aims at giving young aspiring drivers aged between 14-17 years a serious shot at showing what they have on a platform that may ultimately lead to Formula 1. The academic and vocational training initiatives will also be rolled out over the next twelve months.

Mallya added, “If the academy is able to place even one Indian on the F1 grid then all the effort would have been well worth it when our national anthem is played out for a victorious graduate for the academy.” Inspirational indeed for all those aspiring Hamiltons and Alonsos out there!

The driving talent hunt is based on a three-stage programme starting with regional trials in seven cities across India. 14 finalists will be selected from each city and head into the national finals scheduled in September later this year, where they will slug it out to make it to the top-ten and move onto the next level of the programme.

Come October, the ten finalists will head for an intensive week-long stint at Silverstone comprising of driving sessions, fitness assessment and development, media training and two days at the F1 circuit with sessions on safety and race procedures. This phase of the programme will culminate with the ten drivers battling it out in a Formula Silverstone race, at the end of which an expert panel will pick three winners on basis of their overall capabilities and required proficiency in multiple areas. The announcement of the top three will be made around the time of the Indian Grand Prix.

Over the next three years, the winner will be fully supported by the academy with a career path chalked out depending on the progress made in 2012. Hopefully, the winner would be groomed to a level where he is qualified and ready to apply for a FIA Super License to be on the Formula 1 grid.

So to all those aspiring speedsters who need a platform to show what you have- nothing can match the progression level promised by the Force India F1 team academy- this is as good as it can get! The driver hunt is proposed to be held every two years only, so head to www.onefromabillion.com and register yourself today.