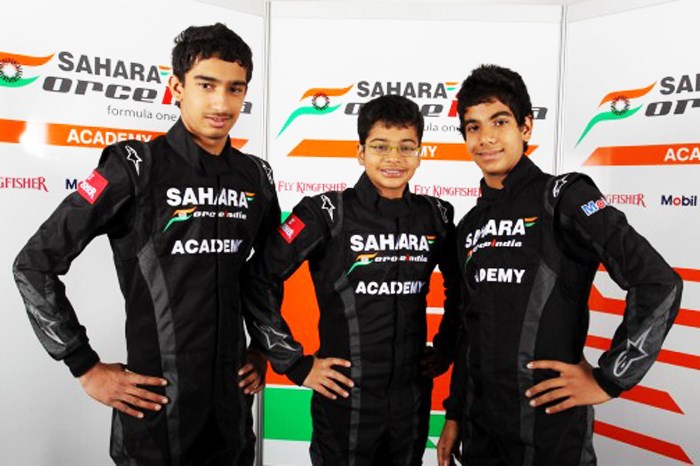 The three finalists from the Force India ‘One in a Billion’ hunt completed last year, Arjun Maini from Bangalore, Tarun Reddy from Chennai and Jehan Daruvala from Mumbai made their debut in the British Super One Championship last weekend.

Super One is Britain’s premier karting series, and the three drivers are competing in the KF3 Junior class of the championship.

The opening round at PF International Circuit near Grantham in Lincolnshire saw the drivers endure difficult conditions on their debut. A rain-hit qualifying session saw Daruvala emerged quickest of the three, qualifying on 17th spot among a 27-kart grid while Maini and Reddy managed 20th and 24th places respectively.

In the heats that followed, Daruvalla managed to make progress from his lowly grid spot, finishing ninth in heat one and 12th in heat two while Maini and Reddy managed to bring it home in 18th and 19th.

The finals turned out to be harder work as the three Indians were in the last pack amongst finishers, with Daruvalla leading in 22nd place followed home by Reddy in 24th and Maini in 27th spot.

The second final turned out to be somewhat better, with Daruvalla finishing 16th, immediately followed by Maini in 17th and Reddy in 24th place.

With legendary kart champion Terry Fullerton as their mentor and driver coach, we can expect these young F1 hopefuls to improve quickly in the future.

The eight-round championship’s next stop is the Whilton Mill circuit in Northamptonshire, near Silverstone, for round two on 12th May.

“Last year we started the search across India and identified three extremely quick and hungry youngsters who now have a great opportunity ahead of them”, said Vijay Mallya, Team Principle, Sahara Force India F1 team.

“With a comprehensive development programme mapped out, the academy will continue to nurture their talent as they take the first steps on a journey that will hopefully lead to Formula One.”

“I will watch their progress with great anticipation.”

And so will we!