The 2020 F1 season will officially kick off in Austria on July 3, with eight rounds confirmed to be held from July-September. 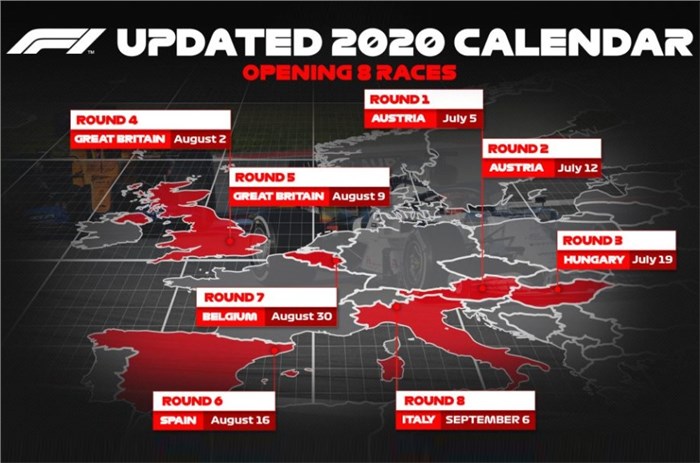 Formula 1 fans have a reason to rejoice! The series has confirmed that its 2020 season – which was on hold due to the COVID-19 pandemic – will officially get underway in July, and has announced the dates for the first eight rounds.

As expected, the initial rounds of the 2020 F1 season will be held in Europe. The biggest reasoning behind this is the fact that the volatile nature of the pandemic leaves a big question mark on the possibility of international travel in the near future.

As reported earlier, the first two races of the season will be held at the Red Bull Ring in Austria on the weekends of July 3-5 and July 10-12. This will then be followed by the Hungarian GP a week later on July 17-19, and then another double header at Britain’s Silverstone circuit on July 31-August 2 and August 7-9.

The packed calendar then moves on to Spa-Francorchamps for the Belgium GP on August 28-30, followed by the Italian GP in Monza on September 4-6.

The FIA requires a minimum of eight races to have a world championship. So crucially, the confirmation of these opening eight races will be enough for a 2020 F1 champion to be crowned at the end of the year.

F1 is expecting to host a total of 15-18 races this year and is currently working on finalising the wider calendar; details of which are expected to be announced in the coming weeks. Additionally, the series has also confirmed that the season will wrap up in December 2020.

These opening races will be held as closed events without any spectators, with the series stating that it hopes “fans will be able to attend again when it is safe to do so”.

The statement also emphasised that all personnel will have to follow strict safety protocol to contain the spread of the virus: “The health and safety of all involved will continue to be priority number one, with Formula 1 and the FIA having a robust and detailed plan to ensure the races maintain the highest level of safety with strict procedures in place.”

The confirmed F1 rounds will also host the opening eight rounds of the 2020 Formula 2 and Formula 3 championships. This means fans will get the chance to see Indian F1 hopeful Jehan Daruvala make his F2 debut with Carlin in early-July.