F1 plans to kick off its 2020 season in early-July in Austria and conclude it in December in the Middle-East. 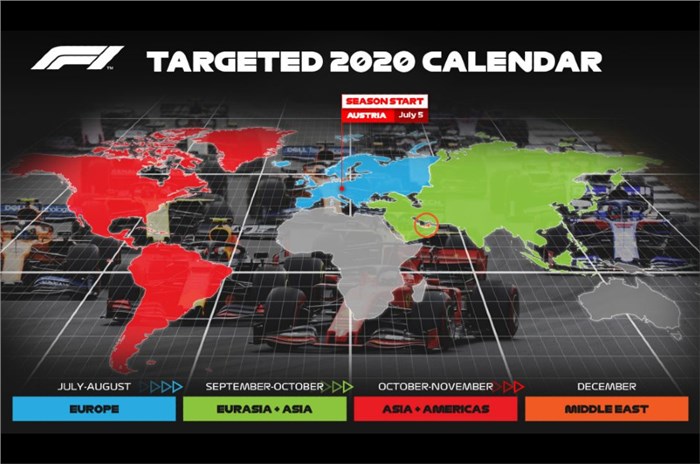 The 2020 Formula 1 season has been hit with a number of delays as a result of the COVID-19 crisis. However, the series’ management has now outlined plans to get the 2020 season underway on July 3-5 in Austria.

Earlier today, organisers of the French GP announced the cancellation of the race (scheduled for June 28), citing France’s ban on major events until at least mid-July, along with the closure of the Schengen area until further notice, as the primary reasons. As per a new target calendar, F1 now hopes to kick-off its 2020 season in Austria, followed by more races in Europe. These initial races will be held behind closed doors, without any spectators – a decision further supported by Silverstone Circuit boss Stuart Pringle confirming that should the British GP go ahead, it would be held as a closed event.

The calendar will then move on to Eurasia and Asia from September-October, before moving on to the Americas and then concluding in the Middle-East in December. According to reports, the new calendar has been drafted to incorporate 15-18 races and a few of the circuits can be expected to host double-headers as well. The series is currently working on finalising a new calendar.

“We expect the early races to be without fans but hope fans will be part of our events as we move further into the schedule. We still have to work out many issues like the procedures for the teams and our other partners to enter and operate in each country,” said F1 CEO Case Carey.

“All of our plans are obviously subject to change as we still have many issues to address and all of us are subject to the unknowns of the virus. We all want the world to return to the one we know and cherish, yet we recognise it must be done in the right and safest way. We look forward to doing our part by enabling our fans to once again safely share the excitement of Formula 1 with family, friends, and the broader community,” he added.