Despite leading most of the race, Daruvala had to settle for P2 after losing out to Vesti at the second Safety Car restart. 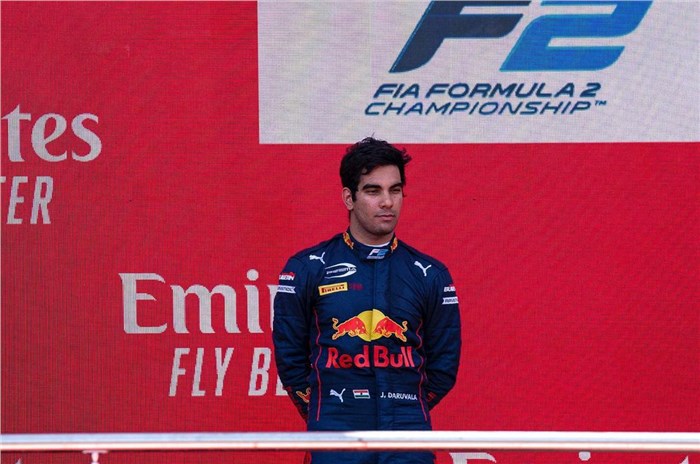 Daruvala has finished on the podium in five out of six rounds so far this year.

It was a day of what ifs for Jehan Daruvala in today’s F2 Azerbaijan GP sprint race. The Indian was on course to clinch his first victory this season, but multiple Safety Cars hindered that. Having lost out to Frederik Vesti at the second restart, he had to settle for second place. This is his fifth podium finish in six rounds.

Daruvala stormed past Jake Hughes and Vesti at the start to take an early lead. As those behind him wrestled for position, the Red Bull junior set about opening a gap. And he managed to do that only for his lead to be wiped away when his Prema teammate Dennis Hauger crashed on Lap 14, bringing out the Safety Car.

Racing resumed on lap 17 and Daruvala did well to defend his lead. But it wasn’t long before the Safety Car deployed once again after Enzo Fittipaldi made contact with Juri Vips. This time around, Daruvala wasn’t able to replicate the near-perfect restart he’d pulled off last time. He locked up, allowing Vesti to sweep past him inside of Turn 1 and take the lead.

But Daruvala would have another chance. The Safety Car came out for the third time on lap 19 of 21, with Richard Verschoor in the barrier. This set the stage for a final lap shootout between Daruvala and Vesti for victory.

Vesti held on at the restart, leaving Daruvala to battle it out with fellow Red Bull junior Liam Lawson. However, he managed to keep Lawson at bay to hold on to second place, while Vesti secured his maiden F2 win.

“This one hurts,” Daruvala admitted after the race. “But [it’s] still a P2 finish. I had an awesome start to get into the lead and then just managed the race from there until the safety cars. The car was great all race, but a small lock up on the restart cost us the win today. On to tomorrow.”

Daruvala will be starting tomorrow’s feature race from eighth on the grid. He still holds on third place in the standings with 61 points – 56 points behind current championship lead Felipe Drugovich and 22 points behind Theo Pourchaire.