F1 would have disqualified Rossi: Bernie

A back of the grid start for Rossi in the title-deciding Valencia race,saw him losing the championship to Yamaha team-mate Jorge Lorenzo. 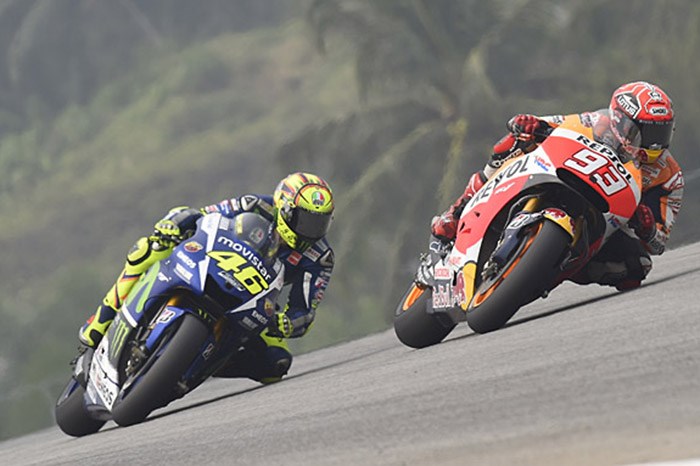 Valentino Rossi would have been immediately black-flagged if his Sepang MotoGP clash with Marc Marquez had happened in Formula 1, reckons Bernie Ecclestone.

Rossi was given three penalty points on his licence for taking Marquez out of the Malaysian Grand Prix amid a bitter feud between the two.

Added to a previous penalty point for blocking in San Marino GP qualifying, that triggered a back of the grid start for Rossi in the title-deciding Valencia race, where he lost the championship to Yamaha team-mate Jorge Lorenzo.

The latter was among those arguing Rossi's penalty was insufficient, and Ecclestone believes F1 would have acted more assertively in such a situation.

"Rossi would have been disqualified for sure," Ecclestone told Gazzetta dello Sport.

"Or he would have been shown the black flag."

Other F1 figures were split on Rossi's actions following the Sepang incident.

While Sebastian Vettel was adamant that "Valentino did absolutely the right thing", Felipe Massa said "I am a big fan of Valentino but he made a mistake".

Ecclestone described MotoGP's late-season controversies - which extended beyond the Sepang collision to a row over whether Marquez was helping countryman Lorenzo's title bid despite them being in different teams - as "a warning for F1".

He added: "I'll give you an example: let's suppose Ferrari is en route for the title and Mercedes block them with one of their customer teams, what would happen then?"

Rossi seriously considered an F1 move in the mid-2000s, completing several tests with Ferrari in 2006 before committing his future to motorcycles.

He has also dabbled in sportscars and rallying, and will take on factory Hyundai World Rally Championship driver Thierry Neuville in this weekend's Monza Rally.

Ecclestone believes Rossi was wise not to pursue a mid-career change of discipline and to stay focused on MotoGP.

"In bikes he was at the top as far as importance and earnings are concerned, while in F1 he would have had to start from scratch," he said.

"He did the right thing in not switching."