The best Ferrari could hope for was 'best of the rest' honours, which Alonso secured after a long tussle with Mark Webber. 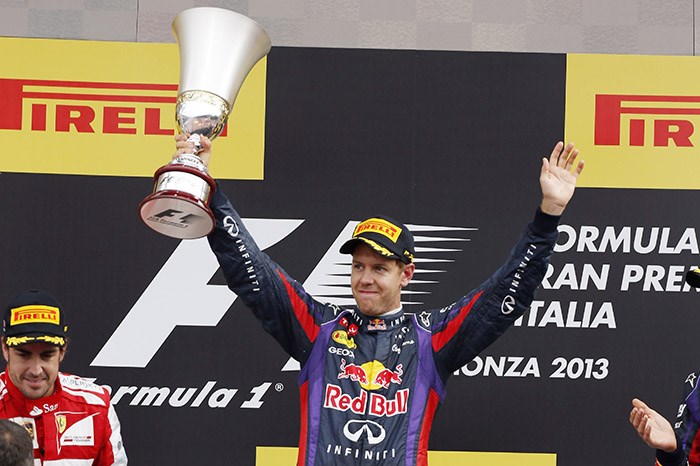 Sebastian Vettel reeled off another dominant Formula 1 victory in the Italian Grand Prix, as Fernando Alonso won a battle for second place.

With the lead Red Bull out of reach from the start, the best Ferrari could hope for was 'best of the rest' honours, which Alonso secured after a long tussle with Vettel's team-mate Mark Webber.

Both Red Bulls were ordered to short-shift to protect potential gearbox issues in the closing stages, but while that stymied Webber's pursuit of Alonso, Vettel had enough in hand to back off and still comfortably triumph.

Vettel was threatened by both Webber and the second Ferrari of Felipe Massa into a crowded first corner, but kept himself ahead and swiftly pulled away.

A beautifully judged move around the outside into the Roggia chicane on lap three took Alonso past Webber's Red Bull for third, as they went wheel to wheel right through the complex, making only slight contact on the exit.

Massa then made life very easy for Alonso when he came to overtake for second, and the Spaniard was able to stabilise Vettel's lead at six seconds.

But when Alonso tried a slightly divergent strategy by running four laps longer before his sole pitstop, Vettel's lead increased to over 10s.

Alonso came back out only just ahead of Webber, who had jumped Massa in the stops, and had several close calls in the closing laps as the Red Bull attacked, before claiming second.

Nico Hulkenberg lived up to his qualifying performance by settling his Sauber into fifth place.

He had Nico Rosberg's Mercedes in often very close company all afternoon, but kept his compatriot at bay and finished just a few seconds behind Alonso, Webber and Massa after an outstanding weekend.

Raikkonen had to pit for a new front wing after bumping into Sergio Perez at the start, while an early slow puncture put Hamilton onto a two-stop strategy, hampered further by radio problems.

The recovering Lotus and Mercedes then ended up in the same place on track late on having an epic battle both with each other and the midfield traffic.

Grosjean reached the end despite Paul di Resta's Force India slamming into his Lotus at the Roggia on lap one, an impact that ended the Scot's race.

Jean-Eric Vergne was another early retirement, having battled in the top 10 before smoke erupted from the right rear of his Toro Rosso.