Fernando Alonso could only qualify fifth amid failed attempts at slipstreaming tactics by Ferrari. 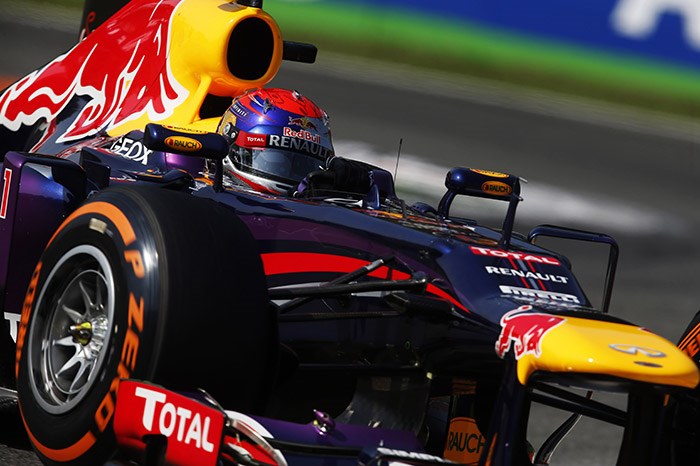 Sebastian Vettel claimed pole position for the Italian Grand Prix as all his Formula 1 championship rivals made a mess of their qualifying sessions.

Fernando Alonso could only qualify fifth amid failed attempts at slipstreaming tactics by Ferrari, while neither Lewis Hamilton nor Kimi Raikkonen made it into the top 10.

Mark Webber, meanwhile, made it a Red Bull one-two, while an astounding effort from Nico Hulkenberg gave the struggling Sauber team a shock third place on the grid.

Ferrari had experimented with its drivers giving each other slipstreams in final practice, but its efforts to orchestrate the same strategy in Q3 fell apart.

The cars were never close enough to make the tactic work and appeared to end up spoiling each other's laps. Felipe Massa eventually found himself fourth ahead of Alonso.

Webber looked to have a shot at pipping Vettel right at the end, but was first on the scene as Jean-Eric Vergne's Toro Rosso ploughed through the Parabolica gravel.

That left Vettel clearly on pole with a 1m23.755s lap, 0.2 seconds quicker than his team-mate.

Although Adrian Sutil is being investigated for impeding Hamilton's Mercedes at the Parabolica at the end of Q2, the Briton blamed poor driving on his part for the qualifying result.

Lotus appeared to be simply short of pace, with Raikkonen and team-mate Romain Grosjean only 11th and 13th.

While they all underperformed, Hulkenberg starred with a Q3 lap just 0.037s off Webber's Red Bull and ahead of the Ferraris and Nico Rosberg's Mercedes.

Sutil is currently 14th, pending any penalty. Force India looked in jeopardy of a Q1 exit until late improvements for both drivers, but there was little progress in Q2.

Rookies Esteban Gutierrez and Valtteri Bottas were ultimately the drivers who joined the Caterhams and Marussias at the back.