Nasr's lap came just a couple of minutes after Raikkonen had gone quickest on a set of medium-compound tyres. 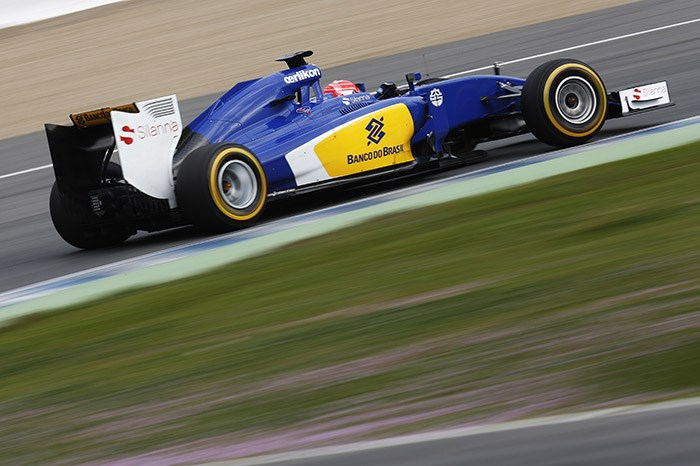 Felipe Nasr topped the third day of Formula 1 testing at Jerez for Sauber, as the team's soft tyre strategy finally got it ahead of Ferrari.

The Swiss team opted for a quick run on the yellow-sidewalled Pirelli tyres for the third successive day, but while it narrowly missed out on top spot to Sebastian Vettel's Ferrari on days one and two, Nasr was able to beat Vettel's team-mate Kimi Raikkonen to that honour on Tuesday.

Nasr's lap came just a couple of minutes after Raikkonen had gone quickest on a set of medium-compound tyres, during a mid-afternoon spell where the Sauber had a couple of turns at the top and Nico Rosberg's Mercedes briefly got in on the act as well.

Mercedes once again dominated in terms of mileage, with Rosberg adding 151 laps to the 157 he managed on day one and the 91 team-mate Lewis Hamilton completed before a water leak curtailed his running on Monday.

Rosberg's day was not trouble free though, as an on-track engine shutdown forced him to a halt just before 1pm, bringing out the red flags.

That was the second stoppage of the day. Nasr had caused the first when he spun into the Turn 9 gravel when the circuit was damp in the morning.

There was a third red flag with just over one minute left in the day's running, caused by Pastor Maldonado stopping on the backstraight.

McLaren-Honda enjoyed its best day yet as Fernando Alonso managed 32 laps in the morning, but a problem with the engine - detected by the Spaniard on an out-lap - brought its running to a premature end.

That left the MP4-30 comfortably bottom of the timesheets, as Alonso missed out on the fully dry conditions of the afternoon.

Lotus made a late start to the day due to a telemetry problem, while Red Bull suffered engine gremlins that limited Daniel Ricciardo to little more than some short runs late in the day in the RB11.