The German was a couple of tenths behind his Mercedes team-mate during early running, when the field was using the slower medium-compound Pirellis. 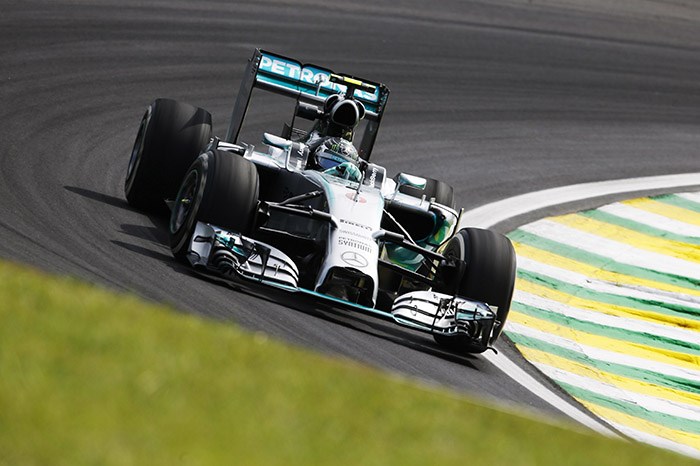 The German was a couple of tenths behind his Mercedes team-mate during the early running, when the field was using the slower medium-compound Pirelli rubber.

But on his first flying lap after bolting on the softs, Rosberg jumped to the top of the timesheets ahead of Red Bull driver Daniel Ricciardo, who had been the first driver to use the faster rubber.

Hamilton, just behind Rosberg on the road, was already 0.275s slower than Rosberg after the first two sectors, but ran wide at the Mergulho corner and ended up six tenths behind.

Although Hamilton did improve on his second flyer, and set the fastest time of the session in the middle sector, he still ended up two tenths slower than Rosberg.

Kimi Raikkonen was third fastest after leaving his soft-tyre run later than most, although he subsequently had a brief off.

That put him ahead of Ricciardo, who shaded the two Williams entries of Valtteri Bottas and Felipe Massa.

Fernando Alonso was seventh fastest, a second off the pace, but his session came to a spectacular end that caused a red flag.

The rear of his Ferrari caught fire in what is suspected to be a power unit-related problem, causing him to stop on the straight between the Sol curve and Descida do Lago.

Alonso jumped out of the car and ran behind the barrier, returning moments later with a fire extinguisher to put out the blaze.

Scuderia Toro Rosso driver Daniil Kvyat was classified as high as fourth at one stage, but ended up eighth ahead of the second Red Bull of Sebastian Vettel.

Kevin Magnussen rounded out the top 10, beating the lead Lotus of Pastor Maldonado by just two hundredths of a second.

Romain Grosjean was 12th ahead of Nico Hulkenberg's Force India, with Sauber pairing Esteban Gutierrez and Adrian Sutil 14th and 15th, the latter complaining of understeer.

Gutierrez, who suffered electrical problems in the morning, also had trouble this afternoon, grinding to a halt with 13 minutes remaining and bringing out another red flag.

Jenson Button had also missed most of the morning session after suffering a loss of power. He was down in 16th place and the slowest of those to complete serious running in the session.

Jean-Eric Vergne completed only five laps after taking over the Toro Rosso run by Max Verstappen in the morning.

He suffered what also appears to be a power unit-related problem and stopped on track, which brought out the first of the three red flags after 11 minutes.

Only 17 drivers ran during the session, with Sergio Perez unable to participate after Force India reserve driver Daniel Juncadella shunted his race car during the morning session.