Rosberg trailed Hamilton through the first two segments of the session at the Yas Marina F1 circuit, but he found the speed when it counted. 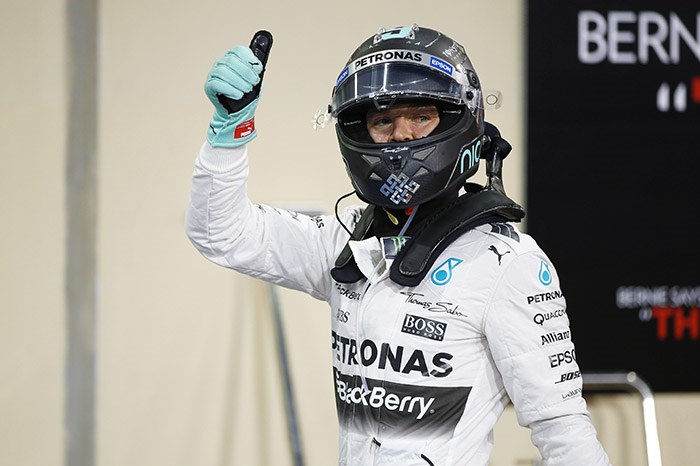 Rosberg trailed Mercedes team-mate Hamilton through the first two segments of the session at the Yas Marina F1 circuit, but he found the speed when it counted to top the timesheet by 0.377 seconds.

Sergio Perez showed Force India's rapid Friday form was no fluke by qualifying fourth fastest, just 0.133s slower than Kimi Raikkonen, who was the only Ferrari driver to make the top 10 after team-mate Sebastian Vettel made a surprise exit in Q1.

Perez was provisionally third quickest after the first runs in Q3, but he couldn't go quicker on his second attempt as Raikkonen improved.

Daniel Ricciardo topped a close fight to be fifth fastest, ahead of Valtteri Bottas, Nico Hulkenberg, and Felipe Massa.

Ricciardo's Red Bull team-mate Daniil Kvyat was nearly two tenths slower in ninth, well ahead Carlos Sainz Jr, who only made a single run in Q3 and was nearly eight tenths of a second adrift of the Russian's time.

Sainz bumped his Toro Rosso team-mate Max Verstappen out of the top-10 with his final flying effort in Q2, while McLaren's Jenson Button missed the cut by less than two tenths of a second as he set the 12th fastest time, complaining of a lack of grip.

Lotus suffered a difficult qualifying session, with Pastor Maldonado only 13th quickest after looking strong in practice, while team-mate Romain Grosjean was unable to set a time in Q2 after suffering technical problems with his E23.

The Lotuses sandwiched the Sauber of Felipe Nasr, who failed to improve on his Q1 laptime and ended up 14th quickest.

Four-time world champion Vettel was the biggest casualty of the first segment of qualifying, backing off early on his final flying lap thinking he'd done enough already but ending up a lowly 16th as rivals improved.

Double world champion Fernando Alonso looked to be on a decent lap until his McLaren-Honda suffered a left-rear puncture that forced him to back off.

The double world champion ended up 17th quickest, ahead of Marcus Ericsson's Sauber, which appeared to suffer a technical problem in the closing stages that prevented the Swede making a final attempt at progressing to Q2.

Will Stevens out-qualified returning team-mate Roberto Merhi by a massive 1.137s as the Manor Marussias again brought up the tailend of the timesheet.