Rosberg glanced the wall during his own final qualifying run at the Baku F1 circuit, but still did enough to claim top spot by nearly eight tenths. 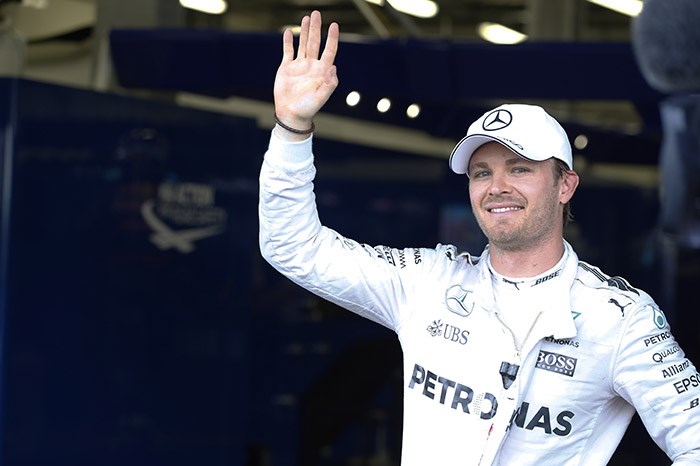 Rosberg glanced the wall during his own final qualifying run at the Baku city F1 circuit, but still did enough to claim top spot by nearly eight tenths of a second.

Hamilton had earlier set the fastest time of all in the first sector but went off at Turn 15.

He regrouped and tried again, matching Rosberg's pace in the first sector, but clipped the inside wall at Turn 12 and broke the front-right suspension on his Mercedes.

That caused the session to be red-flagged, and eventually left Hamilton down in 10th on the grid, without having set a proper time in Q3.

It was a messy session overall for the reigning world champion, who went off during each segment.

Sergio Perez therefore finished the session second fastest for Force India, but he will start seventh thanks to having to change the gearbox following a crash at the end of final practice.

Daniel Ricciardo and Sebastian Vettel set identical times, over four tenths down on the Force India, but Ricciardo took third spot on account of being first across the timing line so inherits the front row position.

"Oh come on, you're joking!" rued Vettel, after Ferrari broke the bad news over team radio.

Kimi Raikkonen and Felipe Massa rounded out the top six, ahead of Daniil Kvyat, the second Williams of Valtteri Bottas, and the second Red Bull of Max Verstappen, who almost collided with Bottas during their first runs in Q3.

Romain Grosjean's Haas came within a tenth of making the top 10, but ended the session 11th fastest, ahead of the second Force India of Nico Hulkenberg, who spun on his first run in Q2 and was only 12th fastest on his second, complaining over team radio about a miscommunication of his run plan.

The second Toro Rosso of Carlos Sainz Jr was 13th, ahead of Fernando Alonso's McLaren-Honda and the second Haas of Esteban Gutierrez, who went off at Turn 7 on his final flying lap.

Felipe Nasr got Sauber through to Q2 for the first time since April's Chinese GP, but couldn't go any quicker in Q2 so finished up 16th fastest.

Manor-Mercedes enjoyed a competitive qualifying session, but missed out on making the Q2 cut by less than two tenths.

Rio Haryanto was fractionally faster than Mercedes junior Pascal Wehrlein, and both were quicker than Jenson Button's McLaren-Honda, which wound up 19th after backing out of his final flying lap in Q1.

He ended up 0.054s down on Wehrlein and cursing over team radio.

Marcus Ericsson was 20th for Sauber, despite grazing a wall on his final lap, while Renault pairing Kevin Magnussen and Jolyon Palmer brought up the rear of the grid.