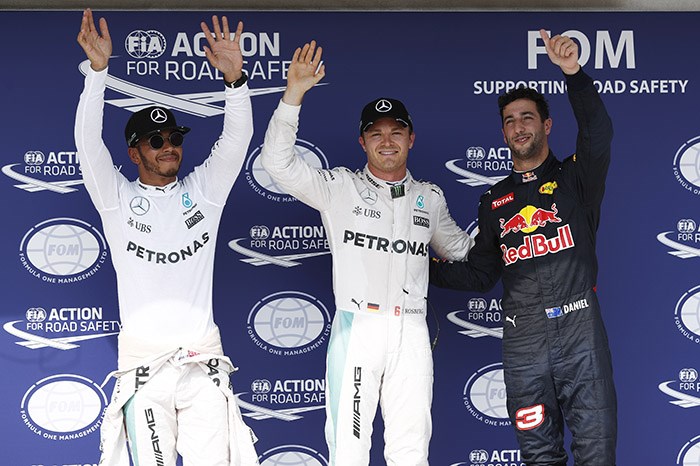 Hamilton held provisional pole after the initial runs in a dry Q3 at the Hungaroring, and looked on course to seal the deal on his second run, but backed out of his lap as Fernando Alonso spun his McLaren at Turn 9 and brought out yellow flags.

Rosberg was running behind Hamilton on the road, and though there was a yellow for Rosberg at Turn 8, Alonso had got going again by the time Rosberg reached Turn 9.

While the first sector of Rosberg's final flying lap was more then four tenths slower than Hamilton's, he was fastest of all through the second sector on a rapidly improving track and stole pole from Hamilton by less than two tenths of a second.

Red Bull's Daniel Ricciardo also had to abort his final flyer and wound up third fastest, just 0.172s slower than Hamilton in a session he called "crazy".

Max Verstappen was fourth fastest in the second Red Bull, ahead of Sebastian Vettel in the only Ferrari to make Q3, Carlos Sainz Jr's Toro Rosso, Alonso, the second McLaren of Jenson Button, Nico Hulkenberg's Force India and the Williams of Valtteri Bottas.

Hamilton was fortunate to even make it through to Q3 after locking up and running wide at Turn 1 on his final Q2 lap.

On a rapidly drying track he tumbled down the order, but remained just inside the top 10 as Romain Grosjean's Haas, Daniil Kvyat's Toro Rosso, Sergio Perez's Force India, Kimi Raikkonen's Ferrari, the second Haas of Esteban Gutierrez, and Felipe Nasr's Sauber all missed the cut.

A second downpour shortly after an already rain delayed start caused the first stoppage, before Marcus Ericsson crashed at Turn 10, Felipe Massa at Turn 4 and finally Rio Haryanto - again at Turn 10 - all which prompted further red flags. Time was finally called with 1m18s remaining on the clock after Haryanto's incident.

"Aww f***ing hell, that's really poor!" bemoaned Jolyon Palmer on team radio, as he became the chief loser of the track position lottery and finished the session 17th quickest, having lapped inside the top 10 in final practice.

Massa ended up 18th, ahead of Kevin Magnussen - who began his final run on wets and aborted to switch to intermediates just before the final stoppage - Ericsson, Pascal Wehrlein and Haryanto.