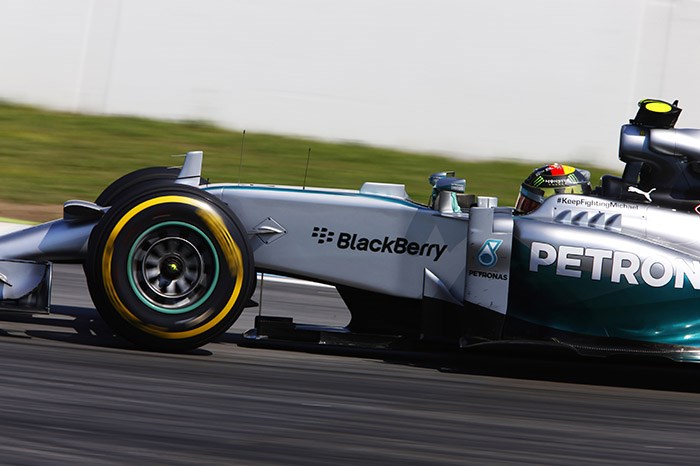 After setting the pace on the first runs in Q3, Rosberg was unable to improve his time on his second run thanks to a slow first sector, but although Bottas set a stunning pace in the middle sector he ended up 0.219s slower.

Hamilton's shunt happened during Q1 when he locked up and went off at the Sachskurve after suffering what Mercedes confirmed was a right-front brake disc failure, forcing the session to be red-flagged.

The Mercedes driver was transferred to the medical centre complaining of pain in his knees, with the team subsequently reporting that he was "OK, but sore after the crash".

Although he had already set a laptime good enough to make Q2, Hamilton was unable to take any further part in the session so was classified 16th overall.

Daniel Ricciardo again outqualified Sebastian Vettel, putting in a strong lap on his one remaining set of super-soft Pirellis in Q3 to beat his team-mate by three tenths.

Fernando Alonso was seventh, ahead of another star rookie, Daniil Kvyat, with Force India pairing Nico Hulkenberg and Sergio Perez ninth and 10th.

Jenson Button failed to make Q3 after being relegated to 11th by Perez in the dying seconds on the second part of qualifying.

He was joined in being knocked out by fellow world champion Kimi Raikkonen, who was four tenths off Ferrari team-mate Alonso in Q2.

Jean-Eric Vergne was 13th after a late effort in Q2, which included a lairy oversteer moment at the exit of the final corner, ahead of Sauber's Esteban Gutierrez and Lotus driver Romain Grosjean.

But Gutierrez must serve a three-place grid penalty for his clash with Pastor Maldonado at Silverstone, meaning he will start 18th, meaning Hamilton's 16th place will put him one place higher on the grid.

Adrian Sutil was the fastest of the six who failed to reach Q2 after being bumped down to 17th by Grosjean late in the first segment of qualifying, with his run on super-soft rubber interrupted by the red flag thrown for Hamilton's accident.

Jules Bianchi was the faster of the Marussias, around half-a-second slower than the Sauber, with Lotus driver Pastor Maldonado 19th.

Kamui Kobayashi pipped Max Chilton to 20th, but the second Caterham of Marcus Ericsson was unable to run at all thanks to a hydraulic leak.