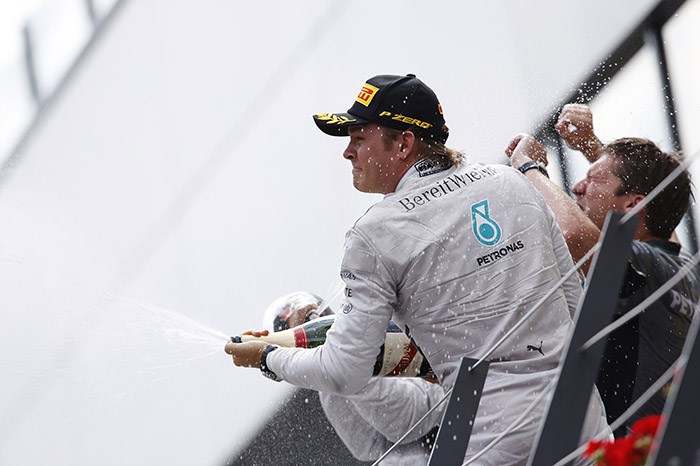 Nico Rosberg extended his lead in the Formula 1 world championship by beating Mercedes team-mate Lewis Hamilton to victory at the Austrian Grand Prix.

The Mercedes drivers used superior strategy to overcome the straightline speed advantage of Williams pair Felipe Massa and Valtteri Bottas at the first F1 race held at the renamed Red Bull Ring since 2003.

Williams nevertheless scored its best results of the season by finishing third and fourth, with Bottas claiming a maiden F1 podium and Massa finishing fourth.

Poleman Massa initially led the race from the first Williams one-two on the grid since 2003, while team-mate Bottas was passed by the fast-starting Mercedes of Nico Rosberg.

But Bottas used Williams' superior straightline speed to retake second on the run up the hill to Turn 2.

A superb start and opening lap from Rosberg's team-mate Hamilton made up for his disastrous showing in qualifying on Saturday, launching him up from row five of the grid to fourth place by the end of the lap, which included a brave pass on Fernando Alonso's Ferrari at Turn 8.

Rosberg pitted for the first time on lap 11 of 71, releasing Hamilton to attack the two Williams. Hamilton pitted two laps later, while Williams waited an extra tour before bringing leader Massa in.

The Brazilian lost out during this first round of stops. He was jumped by Rosberg in the pits and passed by Hamilton at Turn 2 on his out-lap.

By contrast, a great in-lap from Bottas, who was last of the leading group to pit on lap 15, kept him ahead of Hamilton and allowed the Finn to jump his Williams team-mate.

All four ran behind the Force India of Sergio Perez during the second phase of the race, owing to the Mexican running an alternative strategy from 15th on the grid.

Mercedes warned Hamilton about overheating brakes running in the wake of the Williams, while Rosberg made a point of continually moving out of Perez's slipstream on the straights to cool his own car down.

Perez led until lap 27, when Rosberg dived down the inside unchallenged at Turn 2, while Bottas followed through up the inside on the exit as Perez ran wide.

Hamilton produced a copycat move at Turn 2 on the following lap to take third and set fastest lap as he chased after Bottas and new race leader Rosberg.

The top three bunched up as Rosberg ran wide coming out of Turn 1 on lap 30, allowing Bottas to get into DRS range and dragging Hamilton with him, while Massa held a watching brief slightly further back in fourth.

Rosberg took a few laps to recover his rhythm, but eeked out a two-second lead before Mercedes decided to pit its two drivers for the second time on consecutive tours on laps 39 and 40.

Hamilton came in first and rejoined fifth, just ahead of Kevin Magnussen's McLaren, while Rosberg's slightly faster stop ensured he stayed ahead of Hamilton.

Williams decided not to react immediately, pitting Bottas from the lead on lap 42, and the Finn rejoined behind both Mercedes.

Once Massa and the long-running Ferrari of Fernando Alonso came in for their final stops on lap 44 and 47 respectively, the race finally boiled down to a straight fight between the two Mercedes.

Hamilton was told his brake temperatures were now under control, freeing him up to take the fight to his team-mate, but his front left brake returned to a critical status before he could get close enough to attack.

He came back strongly again across the final few laps, but finished just under two seconds adrift after a mistake at Turn 3 on the final lap.

Alonso's marathon second stint helped him finish just a few seconds shy of the two Williams drivers in fifth, while Perez converted his alternative strategy into an excellent top six finish by passing Kevin Magnussen's McLaren at Turn 2 in the closing stages.

Magnussen nevertheless claimed his best finish since the season-opening Australian GP by finishing seventh, ahead of Canadian GP winner Daniel Ricciardo, who passed Nico Hulkenberg's Force India on the final lap despite not being allowed to use his 'overtake' button.

Red Bull endured a difficult day at the home race of team owner Dietrich Mateschitz, as Ricciardo slumped from fifth on the grid and world champion Sebastian Vettel momentarily lost drive on the second lap and then retired shortly after half distance to save engine mileage.

Kimi Raikkonen's Ferrari rounded out the points scorers, ahead of Jenson Button's McLaren and the lapped Lotus of Pastor Maldonado.