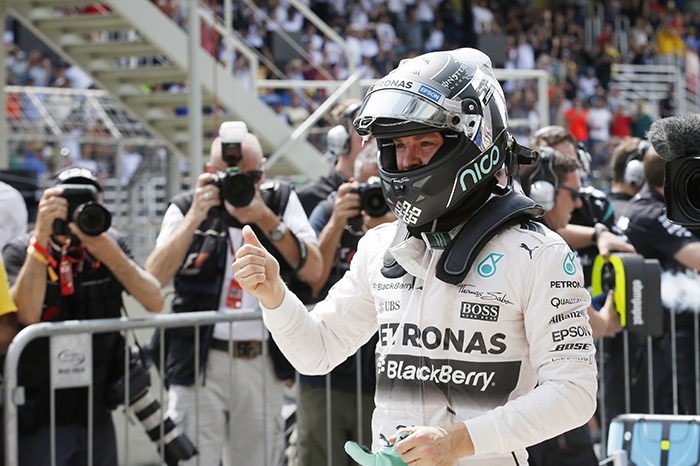 Rosberg was faster than Hamilton throughout the crucial final segment of the session, eventually claiming the 21st pole of his F1 career by just 0.078 seconds.

Sebastian Vettel's Ferrari was third fastest, half a second shy of the top spot, while the Williams of Valtteri Bottas split Vettel from Ferrari team-mate Kimi Raikkonen by finding slightly more time on his second run than his fellow Finn.

Bottas will take a three-place grid penalty, however, for overtaking under red flags during Friday's second practice session.

Nico Hulkenberg impressively rounded out the top six in his Force India, narrowly faster than Daniil Kvyat in the best of the Red Bulls.

Ricciardo will drop to a provisional 19th when the penalty for his earlier engine change is applied.

Massa and Verstappen hauled themselves into the top-10 shootout with late improvements in Q2, which meant Felipe Nasr's impressive lap for Sauber was only good enough for 11th on the timesheet.

Carlos Sainz Jr complained of problems with the dash and data in his Toro Rosso as the Spaniard ended up only 12th fastest, ahead of the second Force India of Sergio Perez, who was a massive 0.662s slower than team-mate Hulkenberg in Q2.

Marcus Ericsson was 14th fastest in the second Sauber, followed by the Lotus of Romain Grosjean, who spun at Ferradura on his crucial lap and then had insufficient tyre life left to get anywhere near making the top 10 on his subsequent effort.

The second Lotus of Pastor Maldonado and Jenson Button's McLaren were next, narrowly missing out on making the Q2 cut in a tight battle during the first segment of qualifying.

Maldonado was just 0.039s slower than Ericsson's Sauber in placing 16th, while Button reckoned McLaren went "a little bit too far with the front wing" as he ended up 17th, just 0.040s further back.

Team-mate Fernando Alonso failed to set a time after his McLaren-Honda broke down with "no power" early on in the session.

The double world champion was therefore classified last, behind the Manor Marussias of Alexander Rossi and Will Stevens, who were separated by just over a tenth of a second.