Polesitter Rosberg came across on Hamilton as the duo approached the Senna S at the start, boldly defending his position to retain the lead. 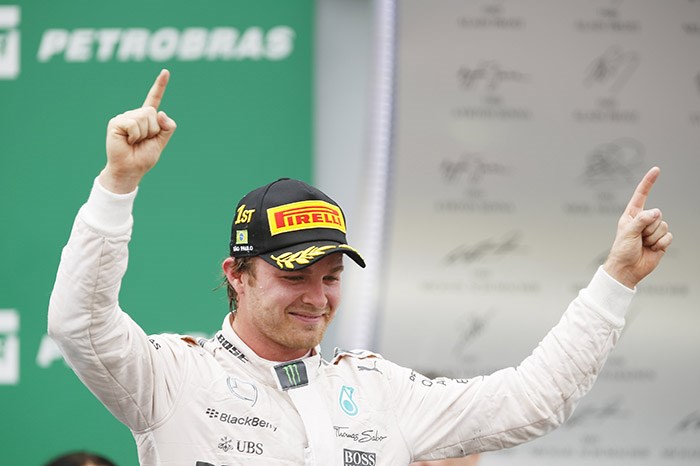 Polesitter Rosberg came across on Hamilton as the duo approached the Senna S at the start, boldly defending his position to retain the lead and from then dictated the race from the front.

Newly-crowned champion Hamilton asked his team if it could tweak his strategy to give him a chance to beat Rosberg, but ultimately the Briton shadowed his team-mate on a three-stop and crossed the line 7.7 seconds adrift.

They had briefly been nose to tail in the second stint, before Hamilton fell away with heavier tyre wear.

Rosberg's fifth victory of the season secured second in the drivers' championship as his main rival for the position Sebastian Vettel could only finish third for Ferrari.

It was a largely processional race with a small threat of rain in the closing stages never materialising and Rosberg lapping everyone up to fourth place.

Ferrari was unable to challenge Mercedes. Vettel tried something different by running a second stint on the softs as most chose mediums but could not get closer and finished comfortably clear of two-stopping team-mate Kimi Raikkonen in third.

Williams's Valtteri Bottas made a brilliant getaway from his penalised seventh on the grid to squeeze past Daniil Kvyat and Nico Hulkenberg for fifth.

But that was as good as it got for the Finn, who stayed in that position for the remainder of the race and ensured his Williams team clinched third in the constructors' championship.

Hulkenberg crossed the line sixth, ahead of Kvyat and Felipe Massa, whose Williams team was summoned to the stewards after the race in relation to a tyre pressure and temperature discrepancy on the grid.

Romain Grosjean was ninth ahead of Max Verstappen, who made a series of passes in the final stint after choosing to run the soft.

It was Verstappen's sixth successive points-scoring finish, which is record run for a Toro Rosso driver.

It was a tougher day for his team-mate Carlos Sainz Jr, who had a problem on the grid and had to start from the pitlane before retiring on the first lap.

Pastor Maldonado, who ended up 11th, collided with Marcus Ericsson at the Senna S, tipping the Sauber into a spin and incurring a five-second penalty.

Ericsson, who lost five places on the first lap when he ran wide at the Descida do Lago, continued after the contact with Maldonado but lost too much ground and finished 17th.

The Manor-run Marussias of Will Stevens and Alexander Rossi, who will be replaced by Roberto Merhi for the final race in Abu Dhabi, completed the finishers in 18th and 19th respectively.