Rosberg laid down a 1m24.681s on his first run and that proved enough for top spot when Hamilton failed to improve on his second run. 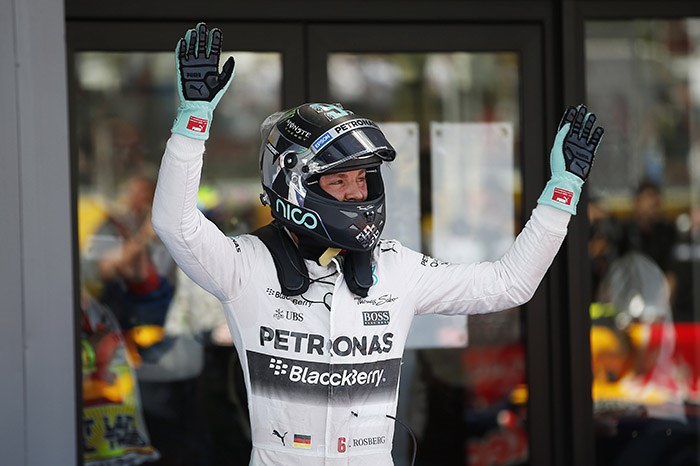 Rosberg laid down a 1m24.681s on his first run in the top-10 shootout, and that proved enough for top spot when Hamilton failed to improve on his second run.

The Mercedes W06 had such a pace advantage over the rest that Hamilton and Rosberg could afford to run the harder tyre compound and still outpace everyone else in Q1, so it was only ever likely to be a personal battle between the two for pole - one that Rosberg won.

Ferrari's Sebastian Vettel was best-of-the-rest, but almost eight tenths adrift of Rosberg, while team-mate Kimi Raikkonen used a new set of medium tyres to guarantee passage through Q1 and paid the price.

The Finn was four tenths slower on his sole Q3 run than he had been in Q2 and wound up seventh on the grid, behind the Williams of Valtteri Bottas and the Toro Rossos of Carlos Sainz Jr and Max Verstappen that have looked strong all weekend.

Felipe Massa wound up ninth fastest, over a second slower than his Williams team-mate Bottas.

The Brazilian split the Red Bulls, with Daniil Kvyat getting the better of team-mate Daniel Ricciardo by 0.141s to qualify eighth.

Both Lotus drivers failed to make it through to Q3 by over half a second, with Romain Grosjean 11th (complaining of a lack of front-end grip) and Pastor Maldonado 12th.

Both McLarens made it through to Q2 for the first time this season, but lacked the pace to be top-10 contenders.

Fernando Alonso was 11th fastest on his first Q2 run on used medium tyres, but he failed to improve on new rubber on his second run and slipped to 13th, just ahead of team-mate Jenson Button.

Felipe Nasr's Sauber split the McLarens in Q1, but the Brazilian lost pace in Q2 and wound up 15th.

Team-mate Marcus Ericsson joined the Force Indias and Manor Marussias in falling after the first segment of the session.

Ericsson found six tenths of a second on his final run in Q1, but it wasn't enough for him to join team-mate Nasr in Q2.

Ericsson was almost half a second slower than Nasr - lapping 0.171s shy of making the cut - just ahead of the struggling VJM08s of Nico Hulkenberg and Sergio Perez.

The Manor/Marussias predictably brought up the rear of the grid, almost 2.8s adrift of the next fastest car.

Will Stevens again had the better of team-mate Roberto Merhi, to the tune of eight tenths of a second.