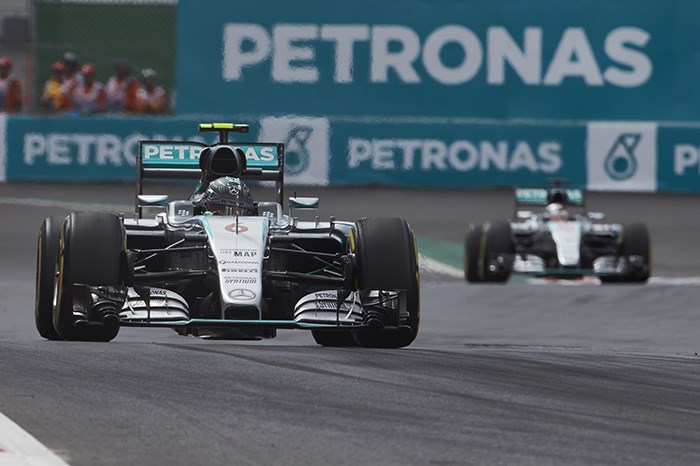 Ferrari's Sebastian Vettel was 0.370s adrift of Rosberg in third, claiming over team radio he "tried everything" to take the fight to the two silver cars.

Red Bull lost pace to its rivals in qualifying compared to practice on Friday, both cars ending up nearly a second adrift of pole.

Daniil Kvyat beat team-mate Daniel Ricciardo by just 0.001s as the RB11s placed fourth and fifth on the timesheet.

Valtteri Bottas rounded out the top six, just ahead of Williams team-mate Felipe Massa and the Toro Rosso of Max Verstappen.

Home hero Sergio Perez out-qualified team-mate Nico Hulkenberg by less than a tenth of a second as the two Force Indias completed the top 10.

Late improvements by Verstappen and Massa in Q2 meant Carlos Sainz Jr missed out on making the top-10 shootout by just 0.007s in the second Toro Rosso.

Romain Grosjean was 12th quickest, 0.223s faster than Lotus team-mate Pastor Maldonado and just over a tenth away from making Q3 himself.

Marcus Ericsson couldn't replicate the pace that put his Sauber 10th quickest in Q1, so he wound up 14th overall, ahead of the second Ferrari of Kimi Raikkonen.

The Finn complained of a problem with his brake pedal in Q1, where he ended up outside the top 10 in the times.

He then stopped midway through Q2 after spinning at Turn 1.

The 2007 world champion will incur a five-place grid penalty for a gearbox change following the breakdown he suffered with his SF15-T in final practice.

Fellow world champion Fernando Alonso squeaked ahead of the second Sauber of Felipe Nasr by 0.009s with his final flying lap, but the McLaren failed to escape Q1, along with the two Manor Marussias and his team-mate Jenson Button, who failed to take part in qualifying following engine problems in final practice.

Both McLarens will start at the back on account of incurring grid penalties for multiple engine changes earlier in the weekend.