After Rosberg crossed the line for the final time, Hamilton completed his lap but a lock-up at the hairpin cost him and he ended up two tenths slower. 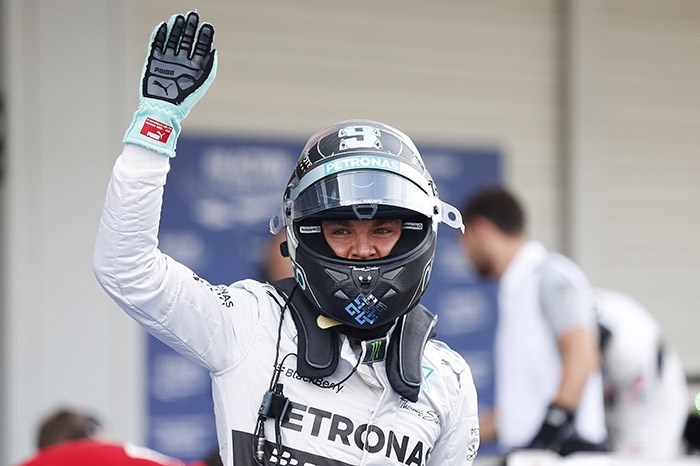 The German had set the pace in Q2 and on the first runs in the top 10 shootout, and consolidated his place in top spot by shaving just over a tenth off his time on his second run.

After Rosberg crossed the line for the final time, Hamilton completed his lap but a lock-up at the hairpin cost him and he ended up two tenths slower.

This mean that both of Rosberg's flying laps in Q3 were good enough for what could prove to be a vital pole position in the world championship race.

Red Bull had a difficult session. Daniel Ricciardo ended up sixth after flirting with elimination in Q1 and Sebastian Vettel was ninth, both drivers carrying wet set-ups in anticipation of a rain-hit race.

Kevin Magnussen won the intra-McLaren battle by beating Jenson Button to seventh place, with the second Ferrari of Kimi Raikkonen in 10th.

Jean-Eric Vergne was the fastest of those to be eliminated in Q2 in 11th place, falling two tenths short of relegating Vettel with his final lap.

This put Vergne ahead of Force India driver Sergio Perez, who complained of a power problem during Q2, with Vergne's Toro Rosso team-mate Daniil Kvyat 13th after failing to improve on his second run.

Because of breaking into his sixth power unit, Vergne is set to be hit with a 10-place grid penalty for Sunday's race.

Nico Hulkenberg was 13th fastest ahead of the Saubers of Adrian Sutil and Esteban Gutierrez.

Pastor Maldonado was bumped out of Q2 contention in the dying seconds of the first segment of qualifying by Sutil.

The Venezuelan, who will drop to the back of the grid thanks to using his sixth V6 engine of the season shaded Lotus team-mate Romain Grosjean by less than a tenth.

Because Maldonado is only able to serve five of his 10-place grid drop, the remaining positions will be rolled over to next weekend's Russian GP.

Home hero Kamui Kobayashi, whose Friday afternoon session was ruined by a crash, was 21st ahead of Max Chilton.