Hamilton topped morning practice but an electronic issue meant he was forced to miss most of the afternoon session, lead by Rosberg. 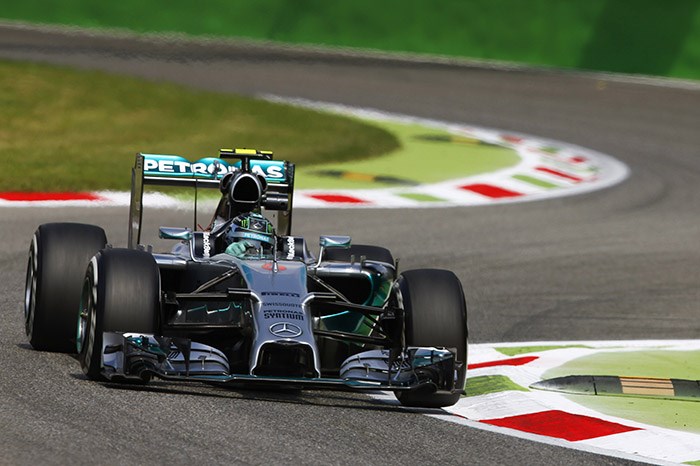 After Lewis Hamilton's domination of first Friday practice at Monza, teammate Nico Rosberg topped the afternoon session for the Italian Grand Prix, but his title rival Hamilton pushed him hard despite car problems.

Rosberg set the pace during the early stages of the session on the slower hard-compound Pirelli, shading Fernando Alonso by four thousandths of a second.

The Mercedes driver then switched to the medium Pirellis, improving his fastest time by just over half a second, setting a best of 1m26.225s.

While Rosberg was completing a normal programme, Hamilton spent the first hour of the session in the garage while the Mercedes team chased an electronic problem that prevented the car from firing up.

Hamilton then completed a brief three-lap run on the hard Pirellis before bolting on the faster mediums.

He managed to set a time just 61 thousandths of a second slower than Rosberg, posting the fastest time in the middle sector in the process.

With the tyre degradation mild, Hamilton was able to have another serious attempt at improving, but was unable to do so.

The Finn out-paced team-mate Alonso, who might have set a better time but for a small error under braking.

Raikkonen, too, showed he potentially had even more pace, setting the fastest time of all in the first sector before an error meant he had no chance of improving on that lap.

Williams driver Valtteri Bottas was fifth fastest, just ahead of Red Bull's Sebastian Vettel, who lost time with a mistake in the Parabolica on his quickest lap.

McLaren pairing Jenson Button and Kevin Magnussen were seventh and eighth fastest, the former setting an identical time to Vettel but being classified behind him as the reigning world champion set his lap first.

Felipe Massa and Daniel Ricciardo rounded out the top 10, which was covered by just three quarters of a second.

Force India pairing Sergio Perez and Nico Hulkenberg just missed out on the top 10, in 11th and 12th, ahead of the best of the Toro Rossos, driven by Daniil Kvyat.

The top 16 were covered by just 1.804s, with Esteban Gutierrez, Jean-Eric Vergne and Adrian Sutil all in that group.

That left a pack of six cars cast adrift at the back, with Jules Bianchi's Marussia the quickest of those, 2.424s off the pace.

The group also included the Lotus-Renaults of Pastor Maldonado and Romain Grosjean, the latter having missed the morning session to allow Charles Pic to take over and then having a wild trip through the gravel while on his first run on hards early in the session.

A number of drivers had off-track moments during the session and were forced to cut chicanes, with Rosberg, Hamilton, Ricciardo and Button among those who did so.