Felipe Massa led a shock Williams one-two in qualifying for the Austrian Grand Prix, as Mercedes was outshone. 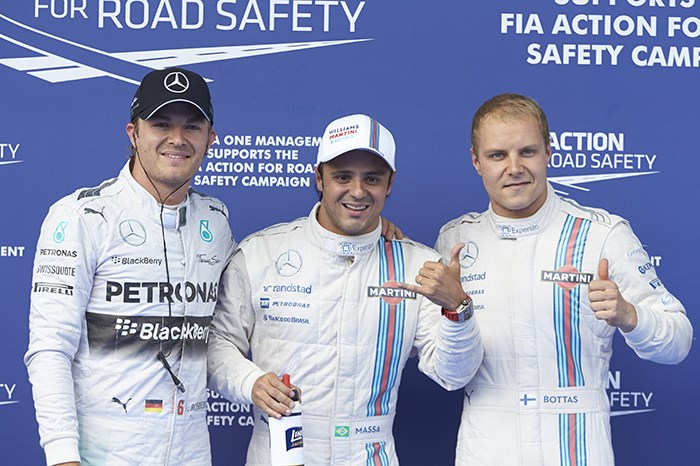 The Brazilian's last-gasp effort knocked team-mate Valtteri Bottas off top spot in the final seconds of qualifying, giving him pole by just under a tenth of a second.

It was Massa's first pole since the 2008 Brazilian GP and the first for Williams since the 2012 Spanish GP.

World championship leader Nico Rosberg was third fastest after failing to improve on his final attempt, but while he missed out on top spot he will be happy to see title rival Lewis Hamilton down in ninth.

Hamilton's first run in Q3, which would have been good enough for fifth on the grid, was disallowed for exceeding track limits at the exit of Turn 8 after the rear stepped out.

His second attempt was ruined by a spin at Turn 2, meaning that he did not set a time, putting him ahead of only the Force India of Nico Hulkenberg.

Fernando Alonso was just over half-a-second off the pace in fourth place.

Daniel Ricciardo was fifth fastest ahead of McLaren's Kevin Magnussen, with Daniil Kvyat a superb seventh.

Kimi Raikkonen was the slowest of those actually to register a lap time in Q2, ending up eighth.

Sergio Perez was 11th after being bumped out of a Q3 position late on, missing out by just under a tenth of a second.

But he will start 16th thanks to the five-place grid penalty he received for causing a collision with Massa in the Canadian GP two weeks ago.

The Mexican's former team-mate Jenson Button, whose morning practice session was ruined by a rear brake problem, and Sebastian Vettel, whose lack of pace in the final sector cost him, were just behind Perez.

Adrian Sutil was the fastest of those to be knocked out in Q1, ending up just four-thousandths slower than Maldonado.

He was comfortably ahead of Sauber team-mate Esteban Gutierrez, with Jules Bianchi 19th fastest.

Kamui Kobayashi did a good job to split the Marussias, a tenth faster than Max Chilton, with Marcus Ericsson unable to improve on his second run and ending up last.

Numerous drivers had lap times automatically disallowed during the session for running wide beyond track limits at the exit of Turn 8.