F1: Kvyat ends on top for Red Bull in Japan

Practice one at Suzuka was badly affected by the weather, to such an extent only 12 of the 20 drivers posted a timed lap in 90 minutes. 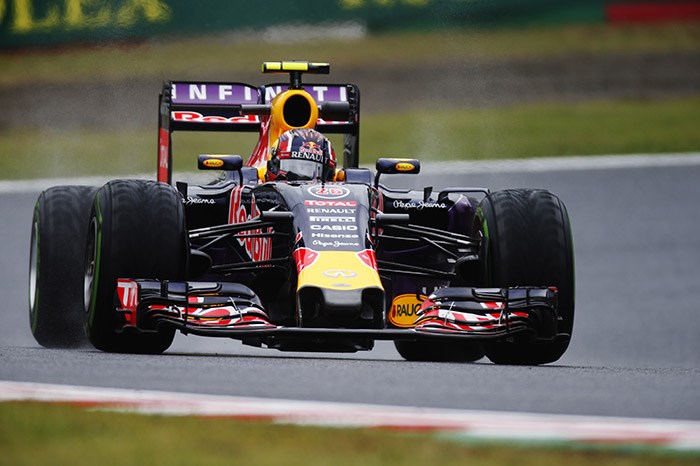 Daniil Kvyat emerged top of the Formula 1 timesheet as second practice for the Japanese Grand Prix turned into another rain-hit session.

Practice one at Suzuka was badly affected by the weather, to such an extent only 12 of the 20 drivers posted a timed lap come the end of the 90 minutes.

The rain had stopped come the start of the afternoon session, but despite leaden skies and a damp track the majority of the field still took advantage of the lull to get some laps under their belts.

On Pirelli's intermediate rubber, Red Bull driver Kvyat was the first to post a time, initially 1m49.374s, marginally quicker than the morning best set by Carlos Sainz Jr in his Toro Rosso.

Kvyat was deposed from top spot by Mercedes' Nico Rosberg, the German taking to the track for Friday practice with the upgraded engine first run at Monza, where the team was forced to change it after the discovery of a coolant leak.

Rosberg is to switch back to his fourth power unit, which was used in Singapore, for the remainder of this weekend.

It was Kvyat, however, who had the final say as the Russian improved to 1m48.277s, finishing just 0.023 seconds clear of Rosberg, with the latter's team-mate Lewis Hamilton over half a second back in third.

Daniel Ricciardo was the only other driver to finish within a second of his Red Bull team-mate, 0.820s adrift, followed by Ferrari pair Kimi Raikkonen and Sebastian Vettel.

Both Ferrari drivers finished around two seconds off the pace, with Vettel completing what proved to be a session high 19 laps.

Sainz, who complained early in the run of "a strange noise" from the engine, shook off that problem to claim seventh ahead of team-mate Max Verstappen, who went off track twice, initially on entry to the chicane at Turn 16 and then later at the Turn 11 hairpin.

Sauber's Felipe Nasr and Pastor Maldonado in his Lotus completed the top 10, the latter just over three seconds back on Kvyat.

Jenson Button waited 27 minutes before venturing out of the garage, and after complaining of "massive understeer" on occasion, finished 12th, 3.584s adrift.

Williams's Felipe Massa was 16th, almost 4.5s behind Kvyat, while team-mate Valtteri Bottas was the only driver not to go out, the Finn claiming he was saving wet-weather tyres despite the forecast for dry weather over the weekend.

Thirty-eight minutes in the rain returned, forcing drivers back to the pits, although Fernando Alonso had to take to the track with McLaren completing an engine change.

Honda discovered an unspecified issue following first practice and as a precaution opted to revert to one of its stash systems, leaving Alonso looking on from hospitality for the opening 40 minutes.

The double world champion eventually wound up 17th, nearly seven seconds down, having only run on wets.

Although the rain worsened through the second half of second practice, a number of drivers still took to the track on full wets as a data-gathering exercise.