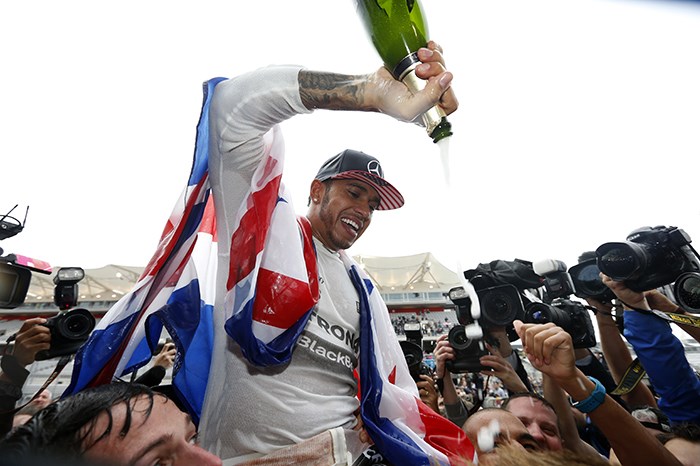 From second on the grid and on the run up the hill into Turn 1, Hamilton had the inside line, and not for the first time this year he forced Rosberg wide and off track after they had bumped wheels, relegating the German to fifth.

When Sauber's Felipe Nasr lost most of his front wing at Turn 1 on lap two after clipping the rear-left tyre of team-mate Marcus Ericsson - on the occasion of the team's 400th grand prix - debris at that corner led to the virtual safety car being called.

On the restart, Hamilton backed up those behind him to such a degree that once the racing resumed Rosberg soon passed Red Bull duo Daniel Ricciardo and Daniil Kvyat.

Over the next few laps, on wearing intermediate tyres and on a circuit not quite ready for a switch to slicks, a titanic battle ensued between the leading quartet.

Ricciardo took the lead on lap 15 from Hamilton, with Rosberg through for second shortly after.

That forced Hamilton into the pits at the end of lap 18, taking on the softs, with the Briton setting the tone as the rest of the field followed him in either on that lap or the following one.

From fourth and second respectively, Hamilton and Rosberg made their way up to third and first with moves on Kvyat and Ricciardo, with the latter duo not as strong on slick rubber.

When Ericsson pulled his car out of the race at Turn 11 on lap 28, its positioning on the track brought the safety car out.

At that stage it wiped out a 10.6s lead for Rosberg over Hamilton, who had passed Ricciardo for second just before Ericsson's exit.

All bar the leading four - Rosberg, Hamilton, Ricciardo, Kvyat - pitted for another change of tyres, with fifth-placed Sebastian Vettel in his Ferrari taking on a new set of mediums in an attempt to get to the end without another stop.

Once the safety car departed after five laps, the German soon cleared Kvyat and Ricciardo to move up to third before another incident on lap 37.

This time it was Force India's Nico Hulkenberg retiring after running into the side of Ricciardo in a bid to claim fifth, leading to a second virtual safety car, under which Rosberg pitted, dropping to fourth, with Hamilton staying out.

Come lap 42, with Rosberg within six seconds of Hamilton, the safety car was deployed again when Kvyat lost his car on the approach to the final turn, sending him into a barrier.

That allowed Hamilton to make his second stop and come out behind Rosberg, whose hopes of extending the title race into Mexico next Sunday ended when he got out of shape at Turn 15 on the power and ran off track at Turn 16-17.

From there it was a smooth run to the finish for Hamilton, with Rosberg just holding off Vettel for second, followed by Toro Rosso's Max Vertsappen in fourth after a long final stint on his tyres.

Just 12 drivers saw the flag, with eight retiring through mechanical failure or after on-track incidents.