Rosberg led for the first 28 laps of a race that began behind the safety car, thanks to appalling conditions. 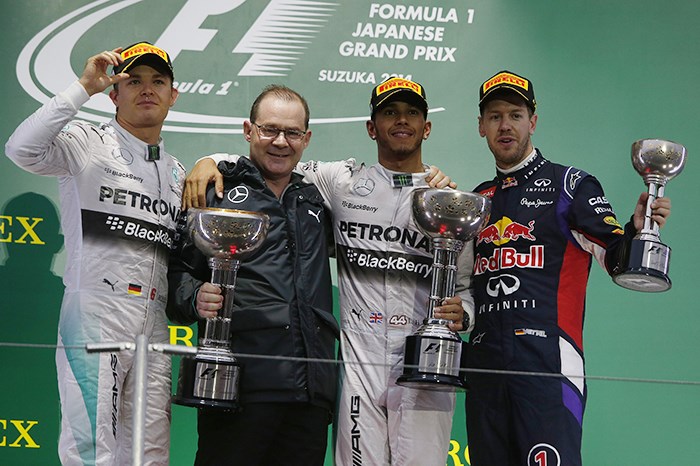 Having lost out to Rosberg in an all-silver battle for pole in the dry on Saturday, Hamilton turned the tables in the wet Suzuka weather of Sunday with a brilliant round-the-outside passing move on his bitter F1 title rival.

Rosberg led for the first 28 laps of a race that began behind the safety car, thanks to appalling conditions.

When the race got going properly after nine laps behind the safety car - interrupted by a red flag following the first two because of rain - the German held a small advantage over his British team-mate as the two Mercedes streaked clear in the spray.

He held Hamilton off until lap 29 when, having suffered a twitch accelerating onto the start-finish straight at the end of the previous lap, he lost enough momentum to allow Hamilton to attack.

Rosberg went defensive, but Hamilton (assisted by extra speed from the Drag Reduction System) swept around the outside of his team-mate to take the lead through Turn 1.

Once released from following Rosberg's gearbox, Hamilton pulled away to take his third consecutive grand prix victory in a race that was red-flagged for a second time under the safety car, after Jules Bianchi's Marussia went off at Turn 7 where marshals were craning away Adrian Sutil's Sauber following an earlier crash.

Bianchi was taken to the circuit medical centre. His Marussia reportedly struck the crane at the crash site.

Red Bull deliberately compromised its dry qualifying pace by setting the RB10 up for the wet, and its drivers used this to good effect to finish third and fourth.

Ferrari-bound reigning world champion Sebastian Vettel completed the podium, despite a trip through the gravel at the Esses, while team-mate Daniel Ricciardo overcame Jenson Button's McLaren to finish fourth.

Button held third spot for most of the first half of the race, after being the first driver to pit for inters, but he lost time to a steering wheel change at his second stop, which dropped him behind Vettel, before Ricciardo further demoted the Brit with a firm pass on the inside of the hairpin on lap 43 - a lap before the result was taken.

Nico Hulkenberg's Force India stopped at the end of the pitlane as the race was red-flagged for the final time, but he finished eighth on countback, while Toro Rosso's Jean-Eric Vergne charged from the back of the grid to claim two points for ninth.

Ferrari took zero points from the race. Kimi Raikkonen finished 12th, while Fernando Alonso retired with a mechanical problem under the safety car before the race began properly.