Hamilton put a recent run of bad fortune behind him to qualify on pole by two tenths of a second. 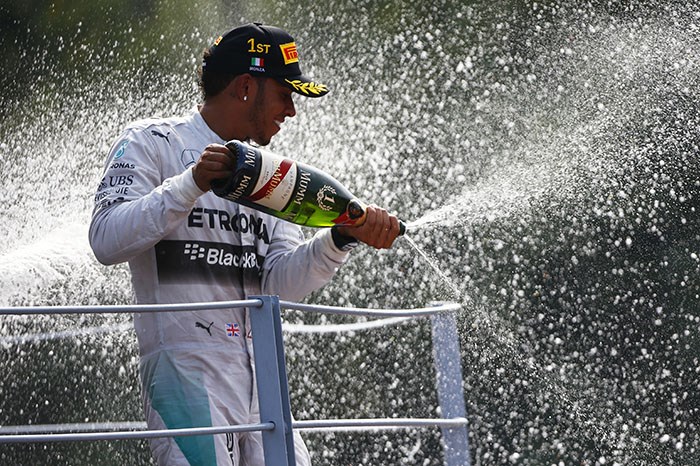 Lewis Hamilton overcame a poor start to beat Formula 1 title rival Nico Rosberg to victory in the Italian Grand Prix and narrow his deficit in the championship battle.

Hamilton put a recent run of bad fortune behind him to qualify on pole by two tenths of a second, but made a poor start and fell to fourth as Sunday's race got under way on a sunny afternoon at Monza.

This removed any chance of a repeat of the collision between Hamilton and Rosberg that handed Red Bull's Daniel Ricciardo victory in the previous race in Belgium.

Rosberg streaked away at the front as Hamilton fell behind the Williams of Felipe Massa and the fast-starting McLaren of Kevin Magnussen, who launched his way up from fifth on the grid to second.

Hamilton struggled initially with his car becoming stuck in 'RS mode', but he soon got back to full speed and began to move forward.

By then Rosberg had already straightlined the first chicane - halving his 3.6-second lead - and Hamilton set about closing down his title rival further.

The Mercedes duo traded fastest laps initially, as Massa tried in vain to go with the leaders, but Hamilton then began to assert his pace advantage over Rosberg as the first half of the race wore on.

He closed to within 1.5s of his Mercedes team-mate but could not leapfrog Rosberg in the pits as the leaders stopped on consecutive laps.

Hamilton was much quicker than Rosberg in the following laps on Pirelli's harder tyre, and Rosberg gifted victory to his team-mate by locking his brakes and again straightlining the first chicane on lap 29.

From there, Hamilton eased away to record his sixth win of 2014 by just over three seconds.

Team-mate Valtteri Bottas was the pre-race favourite to take that final podium spot, having qualified third, but a terrible start dropped him outside the top 10 on the opening lap.

The Finn spent most of the rest of the race slipstreaming his way back through the pack, usually passing rivals before the entry to the first chicane, and eventually made his way back to fourth.

Vettel gambled on making an earlier pitstop than anyone else to gain track position, but could not make his hard tyres last well enough to hang on to the flag.

Ricciardo utilised the alternative strategy - running long in the first stint and stopping late - and made some impressively decisive passing moves as he recovered well from a poor start.

Vettel defended hard into the first chicane with five laps to go, but was passed easily down the inside into the second chicane on tyres eight laps older than Ricciardo's.

Magnussen finished seventh on the road, but was penalised five seconds for forcing Bottas off the track at the first chicane during the Finn's earlier slipstreaming charge, dropping McLaren's rookie Dane to 10th.

Sergio Perez thus inherited seventh for Force India, after a close battle with the second McLaren of Jenson Button, who ran sixth early on but lost track position to Perez at the stops.

The pair ran side-by-side through the Lesmos at one stage, but Button could not force his way decisively back ahead of the Force India.

Kimi Raikkonen finished a close ninth on a disappointing day for Ferrari at the Scuderia's home race.

Team-mate Fernando Alonso started seventh, but recorded his first mechanical non-finish for five years (and the first of this Ferrari career) after his F14 T suffered an ERS failure.

Toro Rosso's Daniil Kvyat should have inherited the final point for 10th when Magnussen's penalty was applied, but the Russian frighteningly straightlined the first chicane at high speed on the penultimate lap and trailed home 11th, complaining of a brake problem.