The race started with six laps behind the safety car after a heavy shower, though it had stopped raining by the time the grand prix began. 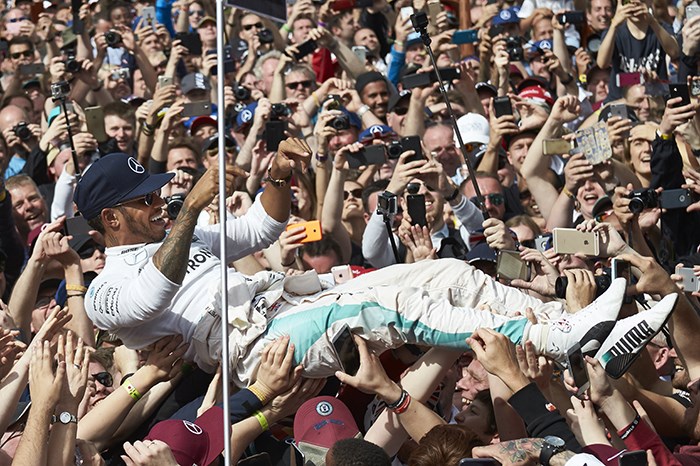 Lewis Hamilton took a comfortable victory in a rain-hit British Grand Prix ahead of Mercedes Formula 1 team-mate Nico Rosberg, who was penalised for a breach of radio rules after a lengthy review.

Reigning world champion Hamilton, who secured his third straight Silverstone win, crossed the line 6.9 seconds clear of Rosberg with Red Bull's Max Verstappen taking his second successive podium in third after splitting the Mercedes for much of the race.

The German was told to shift quickly through seventh gear and given a line of advice on settings, messages the stewards investigated. Eventually, Mercedes was found guilty of breached the restrictions on team radio.

The race started with six laps behind the safety car after a heavy shower, though it had stopped raining by the time the grand prix began.

Several drivers, led by Kimi Raikkonen in fifth, dived straight into the pits for intermediates when the safety car pulled in but Hamilton, Rosberg and Verstappen chose to stay out.

It proved to be smart decision as the virtual safety car was introduced when Pascal Wehrlein beached his Manor in the gravel, allowing the top three to pit and rejoin with a sizeable gap on the rest.

Verstappen coped with the drying track better than Rosberg, carrying far more speed through Becketts and then passing around the outside within the high-speed complex for second before pulling away.

Sebastian Vettel started the trend for dry tyres soon afterwards, with the top three maintaining the same order as they moved to slicks.

Hamilton and Verstappen were caught out by a puddle at Abbey, pitching them over the runoff and allowing the top three to close to within five seconds just past half-distance.

Rosberg was quicker than Verstappen as the track continued to dry and after complaining that the Red Bull driver moved too many times in defence, he eventually made a move stick to snatch second around the outside of Stowe.

Rosberg then closed on Hamilton, getting the gap down from eight to six seconds before the gearbox scare halted his chase.

Red Bull's Daniel Ricciardo finished fourth for the fifth time in 10 races this season, with mid-race Raikkonen fifth after a late pass on Sergio Perez - who had gained ground by staying out on wets as long as the leaders - into Stowe.

Nico Hulkenberg was seventh, ahead of Carlos Sainz Jr and Vettel, who held onto ninth despite a five-second time penalty for forcing Felipe Massa off track at Village.

Raikkonen, Perez and Sainz all escaped excursions and spins at Abbey on the same slippery patch that caught out Hamilton and Verstappen.

Massa missed out on points in 11th ahead of Jenson Button, who started 17th, and Fernando Alonso, who had a spectacular spin at Abbey and nudged the barrier before continuing.

Jolyon Palmer had a messy home race, with 10-second stop-go penalty after his Renault team released him in the pits without a right-rear tyre, and retired late on.