Hamilton was fastest early in the session while all drivers were running on the slower soft-compound Pirelli tyres. 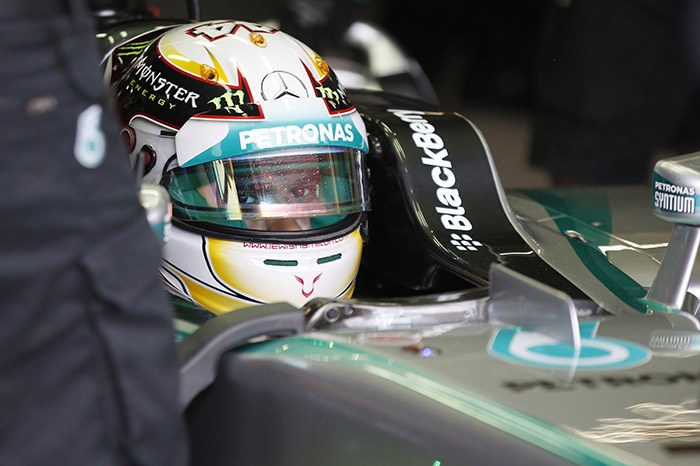 Hamilton was fastest early in the session while all drivers were running on the slower soft-compound Pirelli tyres, just 39-thousandths of a second faster than his Mercedes team-mate.

But when the pair headed out for their super-soft runs, Hamilton made a big improvement to put in a time 0.747s seconds faster than Rosberg, who found only a tenth on his first flier.

Hamilton subsequently found another tenth to improve his advantage to 0.857s briefly, only for Rosberg to string together a better lap to end up 0.377s down.

Later in the session, Hamilton did have some trouble while doing long-run work, complaining of a loss of power.

Ferrari driver Fernando Alonso was third fastest, just over nine tenths off the pace, while Williams driver Valtteri Bottas, who had been the closest challenger to Mercedes on soft-tyre pace, was fourth.

Sebastian Vettel, who started the session late thanks to his floor having to be changed after his high-speed spin exiting the final corner during the morning session, was sixth fastest, almost 1.3s slower than Hamilton.

Jenson Button, driving the updated McLaren, was seventh fastest, just six thousandths of a second slower than Vettel and a tenth quicker than the other Red Bull of Daniel Ricciardo, who also had to have a floor changed after a morning off.

Kevin Magnussen was ninth fastest, with Jean-Eric Vergne once again making it into the top 10 for Scuderia Toro Rosso.

It was a difficult session for Kimi Raikkonen, who ended up 11th fastest, half-a-second slower than team-mate Alonso, and endured a grassy moment after running wide at the last corner late on.

Adrian Sutil, who managed only nine laps this morning after a split hose led to the turbo failing, completed a full programme to end up 16th fastest.

Caterham driver Marcus Ericsson also had a better session after stopping after eight laps this morning.

Although rain threatened late in the session, it stayed away and teams were able to complete their planned programmes.