Lewis Hamilton topped the timesheets in rain-interrupted practice sessions as the 2016 Formula 1 season got under way with the Australian Grand Prix. 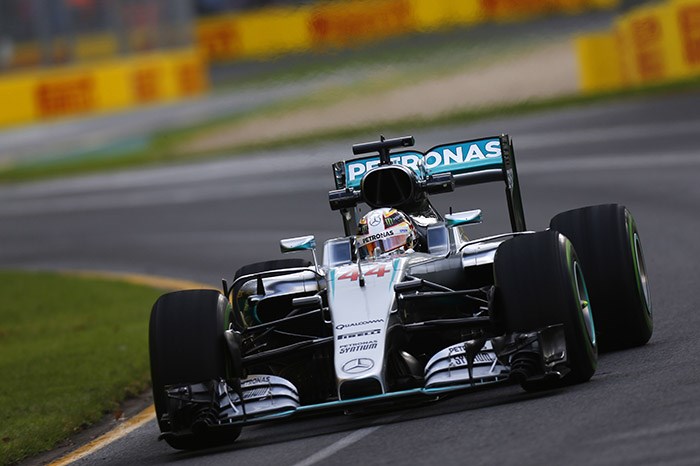 Lewis Hamilton topped the timesheets in rain-interrupted practice sessions as the 2016 Formula 1 season got under way with the Australian Grand Prix at Melbourne's Albert Park.

Rain earlier in the morning soaked the track and though a dry line appeared, the session was disjointed as showers fell intermittently throughout.

Drivers were limited to a 15-minute window towards the end of the a 90-minute session to get some representative dry running in.

A heavy shower hit with a few minutes to go, catching out Kimi Raikkonen and Ricciardo, with the Red Bull getting stuck deep in the gravel.

Things weren't much better in practice two, as a heavy downpour soaked the Melbourne track between sessions, and added to the cool 17-degree air temperature it meant intermediate tyre running only in practice two.

A further shower 15 minutes from the end, at a time when the track was drying and the teams may have been considering slicks, ensured the times stayed considerably off the pace of the morning.

A number of drivers did venture out when the conditions were poor early in the session, but it went wrong for Rosberg half an hour in.

The German aquaplaned out of Turn 6 and lost control of his Mercedes, sending him into a wall and wrecking the new-for-2016 nose that was trialled during the second pre-season test.

Rosberg was able to continue, but with the wing lodged underneath his car, he was told by the pitwall to stop and pull over given the debris being created.

Mercedes at least confirmed it has spares available to ensure Rosberg runs with the new-spec nose over the weekend.

While Rosberg was left watching from the pits, Hamilton again topped the timesheet but, indicative of the conditions, his lap of 1m38.841s was nine seconds down on his earlier benchmark.