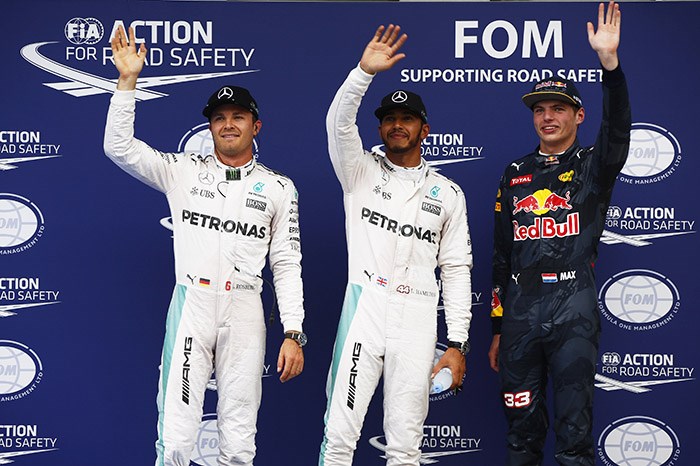 Hamilton clocked a 1m32.850s best on his first run in Q3, which proved easily good enough for pole, despite Hamilton having to abort his second run in Q3.

The points leader was only fifth fastest after the first runs, having run wide at Turn 6, but he rallied later to beat Max Verstappen's Red Bull to a front row spot by 0.156 seconds, despite another moment at the final corner.

Daniel Ricciardo was only 0.017s slower in the second Red Bull, while Ferrari locked out the third row of the grid, with Sebastian Vettel beating Kimi Raikkonen to fifth by less than half a tenth of a second.

The Force Indias of Sergio Perez and Nico Hulkenberg completed a quartet of row lockouts at the front of the grid by qualifying seventh and eighth, just ahead of Jenson Button's McLaren and Felipe Massa's Williams.

Button made it through to Q3 with a fine late effort that, along with improvements from the Force India pair, meant the Williams of Valtteri Bottas missed the cut by just 0.039s, as Bottas failed to improve on his second Q2 run.

Romain Grosjean beat Haas team-mate Esteban Gutierrez to the 12th fastest time by less than a tenth, while Kevin Magnussen did an excellent job to qualify his Renault 14th fastest, having missed most of Friday practice after his car caught fire in the pits in FP1.

A late improvement from Daniil Kvyat meant he beat Toro Rosso team-mate Carlos Sainz Jr to 15th on the grid by just 0.005s.

This was the first time Kvyat has out-qualified Sainz since June's European GP in Azerbaijan.

Jolyon Palmer's Renault and Fernando Alonso's McLaren-Honda joined the Saubers and Manors in exiting the fray after Q1.

Given Magnussen's performance Palmer had a realistic shot at making Q2, but his final lap of the session was scrappy and he ended up dropping behind the Saubers of Marcus Ericsson and Felipe Nasr into 19th place.

Esteban Ocon out-qualified Manor team-mate Pascal Wehrlein for the first time, beating him to the 20th fastest time by 0.136s.

Alonso completed a cursory run on medium tyres in his McLaren, knowing he will start at the back of the grid regardless owing to a 45-place grid penalty for various illegal engine component swaps.