Hamilton sealed pole after establishing himself at the top of the timesheets in Q3 on his first run. 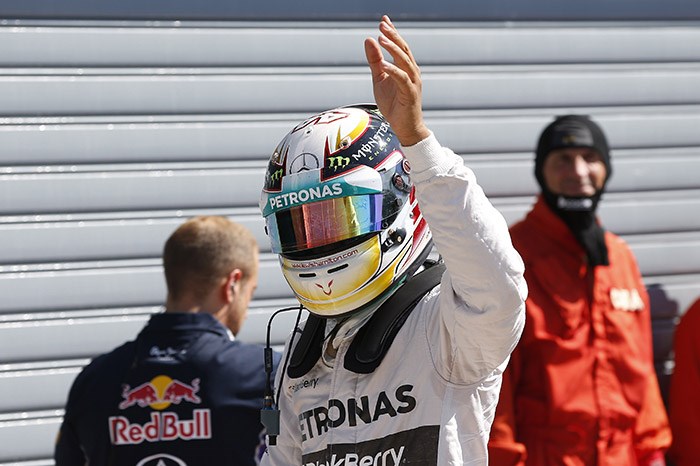 The Mercedes driver outpaced team-mate and world championship rival Nico Rosberg in all three segments of qualifying at Monza.

After establishing himself at the top of the timesheets in the Q3 top 10 shootout on his first run, over four tenths faster than Rosberg, Hamilton had already done enough to be sure of pole.

Rosberg started his second Q3 run before Hamilton, improving his laptime by just under two tenths, which was not enough to knock his team-mate off top spot.

This meant that Hamilton did not need to improve on his final attempt, with the relative position of Rosberg on the track meaning that he knew he had secured pole while on a lap that fell short of his earlier mark of 1m24.109s.

Valtteri Bottas and Felipe Massa locked out the second row for Williams, both drivers unable to improve on their second runs.

But behind them was the big winner of the final seconds of qualifying, Kevin Magnussen, who leaped from eighth to fifth with his final attempt.

Jenson Button, in the second McLaren, was sixth after failing to improve on his final run, just ahead of Fernando Alonso.

The Ferrari driver had made a slight improvement on his final attempt to relegate Red Bull driver Sebastian Vettel to eighth.

Daniil Kvyat was the quickest of those eliminated in Q2 despite a valiant attempt to snatch a top 10 place on the last lap.

The Russian, who will be given a 10-place grid penalty for using his sixth engine of the season, bumped Kimi Raikkonen out of the top in the dying seconds, only for Magnussen to jump from 13th from 10th.

Raikkonen ended up 12th ahead of Jean-Eric Vergne, with Nico Hulkenberg unable to match Force India team-mate Perez and down in 14th place.

Adrian Sutil prevailed in the intra-Sauber battle with Esteban Gutierrez by improving on his final run having looked to be fractionally slower than the Mexican earlier in qualifying.

There were no surprises in Q1, with the three slowest teams in the field populating the dropzone.

Pastor Maldonado was the fastest of those in 17th, just ahead of Lotus team-mate Romain Grosjean.

Grosjean was only able to complete five laps thanks to the team having to fix a fluid leak detected in the build-up to the session, ending up a tenth slower than the Venezuelan after missing the first 13 minutes of the 18-minute session.

Kamui Kobayashi, reinstated in the lead Caterham after sitting out the Belgian GP, was a superb 19th ahead of Jules Bianchi thanks to a combination of an excellent lap and a tow from team-mate Marcus Ericsson.

Ericsson himself ended up 22nd, three tenths behind the second Marussia of Max Chilton.