Lewis Hamilton got his title defence off to a strong start by claiming a comfortable pole position for the Australian Grand Prix. 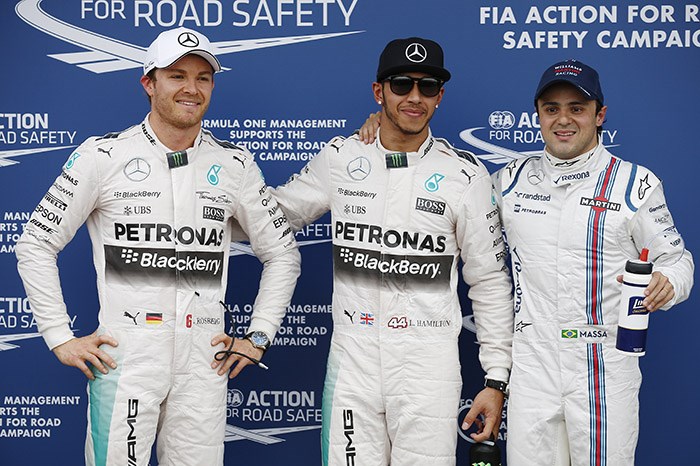 Reigning Formula 1 world champion Lewis Hamilton got his title defence off to a strong start by claiming a comfortable pole position for the Australian Grand Prix.

Hamilton beat his Mercedes F1 team-mate Nico Rosberg to the top spot by almost six tenths of a second around the Albert Park circuit in Melbourne.

The Briton laid down a marker with a 1m26.419s lap on his first run in Q3, while Rosberg had to abort his first effort after running wide onto the grass at the penultimate corner.

Hamilton improved by just under a tenth on his final run to apply further pressure on Rosberg, who had the edge during Friday practice but struggled on Saturday.

Rosberg set the fastest final sector time of all on his last flying lap of the session, but lost too much time in the first sector to challenge Hamilton's superiority.

Felipe Massa claimed third spot on the grid for Williams, edging out the Ferrari of Sebastian Vettel by just 0.039s on his final run.

The Scuderia looked to have the edge over Williams in the early stages of the qualifying, but Massa found a crucial improvement at the end.

Kimi Raikkonen made it two Ferraris in the top five, lapping on the same tenth as Vettel and Massa, while the Williams of Valtteri Bottas rounded out the top six.

The Finn looked strong through the early stages of qualifying, but struggled with the brakes on his FW37 in Q3 and wound up over three tenths slower than his team-mate.

Red Bull's Daniel Ricciardo recovered from a torrid set of practice sessions to bag seventh spot on the grid, ahead of Toro Rosso rookie Carlos Sainz and the Lotus E23s of Romain Grosjean and Pastor Maldonado, which rounded out the top 10.

Sauber's Felipe Nasr fell less than a tenth shy of beating Maldonado into the top-10 shootout, on what has been a miserable weekend off-track for the Swiss team, but the Brazilian's best lap was good enough for 11th on the grid.

Toro Rosso rookie Max Verstappen looked a genuine Q3 contender early on in qualifying, but complained of some discomfort in the cockpit of his STR10 in Q2 and suffered a "big moment" at Turn 5 on his final flying lap, which was only good enough for 12th.

The Russian wound up a lowly 13th, two tenths clear of Nico Hulkenberg and Sergio Perez.

The Force India team-mates were separated by just 0.001s as both VJM08s dropped out in Q2.

Manor GP failed to get its cars running in time for qualifying, meaning only three of the remaining entries could be eliminated in Q1.

Both Jenson Button and Kevin Magnussen failed to make it through, as McLaren-Honda's woeful start to the season continued.

Button managed to lap within 0.046s of Marcus Ericsson's Sauber, which was the other victim of the Q1 cut-off.

However, the Swede lapped almost a full second slower than his team-mate Nasr, who was the slowest of the drivers to make it through to Q2.