Lewis Hamilton continued his dominance of Formula 1 qualifying in 2015 by securing pole position for the Bahrain Grand Prix. 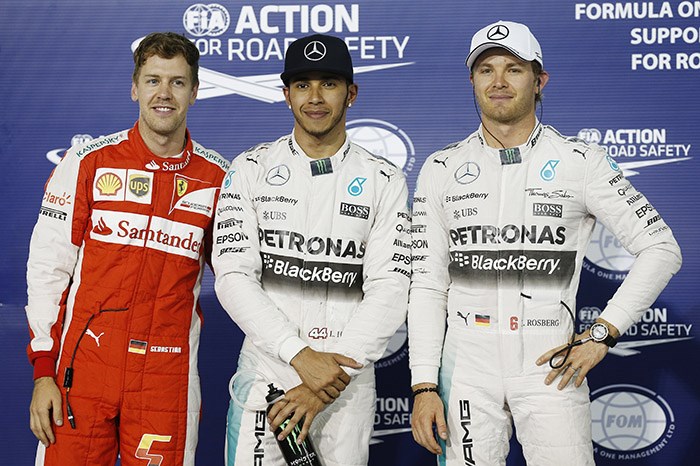 Reigning world champion Hamilton was the only driver to lap below 1m33s in Q2 and found a tenth of a second on his only run in Q3 to secure pole by over four tenths of a second.

Vettel was the only other driver to lap in sub 1m33s, his 1m32.982s lap good enough to relegate Hamilton's team-mate Nico Rosberg to third.

Rosberg, who qualified on pole for this race for the last two years, lost crucial time in the first sector and couldn't recover, ending up 0.147s slower than Vettel, but just ahead of the second Ferrari of Kimi Raikkonen.

Red Bull's Daniel Ricciardo qualified less than a tenth adrift in seventh, but with a gap of over six tenths to the remainder of the top 10.

Both Force Indias made it through to Q2 for the first time this season, with Sergio Perez edging out team-mate Hulkenberg by two tenths of a second in Q1.

But the Mexican just missed out on joining him in Q3 during a tight battle in the middle portion of qualifying.

Perez looked on course to make the top 10 as the session finished, but lost out Sainz by just 0.063s so wound up 11th.

That meant both Saubers missed out on making Q3 - with Felipe Nasr just 0.033s slower than Perez in 12th.

Marcus Ericsson made an error on his best lap so was almost three tenths further back in 13th.

In fact the Swede was only fractionally faster than Fernando Alonso, as McLaren-Honda made it through to Q2 for the first time this season.

Alonso qualified 14th, just ahead of the Toro Rosso of Max Verstappen, who complained of a lack of power at the start of Q2.

A problem with Maldonado's Mercedes engine meant he missed the cut by just 0.024s, having looked strong throughout free practice.

A poor lap from Kvyat, who lost much of Saturday's practice session when he beached his RB11 in the gravel, meant the Russian languished down in 17th place, his worst qualifying result of the season so far.

Will Stevens again comfortably outpaced team-mate Roberto Merhi, as Manor qualified off the final row of the grid for the first time this season thanks to more problems for Button's McLaren.

Button's car, which suffered reliability dramas throughout practice on Friday, stopped exiting Turn 3 on his out-lap with a suspected electrical problem, so the 2009 world champion failed to set a time.