The reigning F1 champion made a good getaway and then held off a fast-starting Sergio Perez in the Force India at Les Combes to lead. 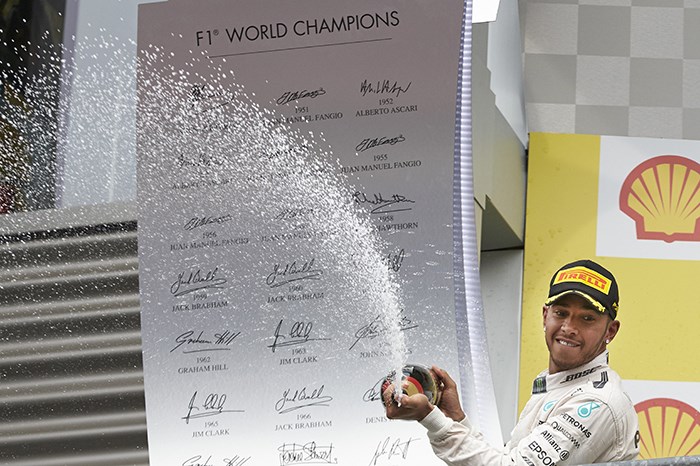 The reigning F1 champion made a good getaway and then held off a fast-starting Sergio Perez in the Force India at Les Combes to lead.

Rosberg bogged down at the start, dropping to fifth, and though he recovered to second and started closing the gap to Hamilton, he was unable to get close enough to challenge.

Ferrari's Sebastian Vettel was on course to complete the podium, after attempting a one-stop strategy that required a 29-lap stint on the mediums, but a right-rear tyre failure with a few laps to go ended his race.

That allowed Romain Grosjean, who had been hustling Vettel, to give Lotus its first podium of the season - a big boost amid an uncertain future and legal battles.

The start was initially aborted when Force India's Nico Hulkenberg encountered mechanical gremlins on the grid, waving his hands to signal he would be unable to get away.

The field went round for a second formation lap while Hulkenberg was pushed into the pits where he retired the car.

At the second time of asking, the field got away with Perez battling Red Bull's Daniel Ricciardo into La Source and coming out on top to take second.

Red Bull ran its Monza-spec at Spa, which allowed Daniil Kvyat and Ricciardo to attack on the straights.

Kvyat charged to fourth after going out of sync on strategy, but last year's race winner Ricciardo was in contention for a podium, running third early on, before slowing and retiring on the exit of the Bus Stop. A brief virtual safety car was required while the Red Bull was retrieved.

Perez secured his best result of the season with fifth in the Force India ahead of Williams's Felipe Massa and Ferrari's Kimi Raikkonen, who rescued some points after starting 16th.

Max Verstappen tried a move on Raikkonen at Les Combes on the last lap but ran out of road and had to settle for eighth, ahead of Valtteri Bottas, whose race unravelled when Williams mistakenly fitted his car with three soft tyres and a medium, which earned him a drive-through penalty.

Sauber fitted the 2015-spec Ferrari engine to its cars for the first time this season with Marcus Ericsson benefiting from Vettel's late tyre failure to snatch the final point with 10th, one place ahead of team-mate Felipe Nasr.

Vettel was classified 12th for his first non-scoring finish of the season.

McLaren's Jenson Button and Fernando Alonso made brilliant getaways, on a weekend when drivers had to find their own clutch bite point under new rules.

Alonso climbed from 20th and last to 12th while Button rose from 19th to 14th, but duo struggled on the high-speed Spa circuit and finished 13th and 14th respectively.

Carlos Sainz Jr pulled into the pits after the formation lap, citing a loss of power, and though Toro Rosso managed to get him going, he retired with 11 laps to go.

Lotus's Pastor Maldonado was unable to take advantage of his top 10 start as he parked the car early in the race with a mechanical problem.