F1: Hamilton beats Rosberg to pole as both go off

Hamilton led the way after the first runs in Q3 by two tenths of a second from team-mate Nico Rosberg, but spun under braking for Turn 1. 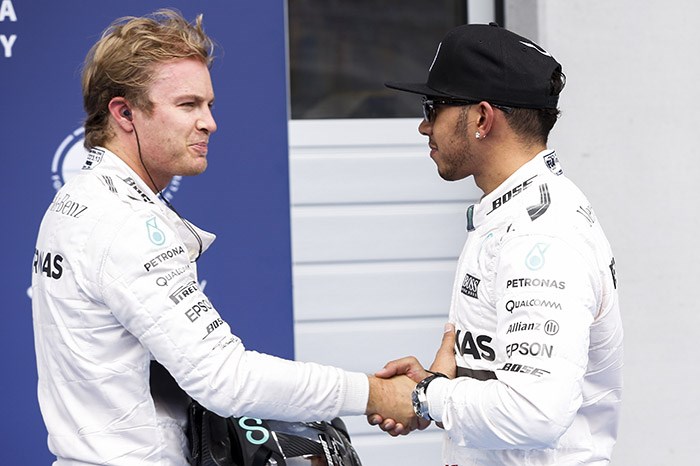 Lewis Hamilton claimed pole position for the Austrian Grand Prix, as both Mercedes Formula 1 drivers went off during their final laps of the session.

Hamilton led the way after the first runs in Q3 by two tenths of a second from team-mate Nico Rosberg, but spun under braking for Turn 1 when attempting to make sure of the top spot.

Rosberg set a personal best time in the first sector, then the fastest time of all in the second sector, before going off at the final corner, which consigned him to second on the grid.

Ferrari's Sebastian Vettel improved on his final run in Q3, but his lap was only good enough for third, 0.155s slower than Rosberg's earlier effort.

Toro Rosso's Max Verstappen shaded Red Bull's Daniil Kvyat by less than a tenth of a second to post the seventh fastest time, as behind him Sauber's Felipe Nasr recorded his best qualifying result since April's Chinese GP by going ninth fastest.

Romain Grosjean's Lotus failed to set a time in Q3, after a suspected brake by wire problem forced him back into the pits early on.

Team-mate Pastor Maldonado missed out on the top-10 shootout by 0.187s as track conditions improved in Q2, while Marcus Ericsson's Sauber, the Toro Rosso of Carlos Sainz, and Daniel Ricciardo's Red Bull qualified on the same tenth of a second in 12th, 13th and 14th but some way adrift of their respective team-mates, who all made Q3.

Sainz complained of traffic on his fast lap, while Ricciardo briefly ran off the road at Turn 3 before failing to make the top-10 shootout for the first time this season.

Fernando Alonso managed to squeak his McLaren-Honda through to Q2, but the MP4-30's lack of power left him adrift of the rest in 15th.

Improving track conditions throughout a Q1 that began damp meant laptimes tumbled as the session reached its climax, creating the potential for upsets.

Ferrari's Kimi Raikkonen was the highest-profile scalp in this segment, the Finn missing the Q2 cut by 0.359s and winding up 18th fastest, much to his own surprise over team radio.

Force India's Sergio Perez also missed out, just 0.014s slower than Alonso's McLaren at the death, while Alonso's team-mate Jenson Button had been fastest at one point, before slipping back to 17th at the end.

Roberto Merhi outqualified his team-mate Will Stevens, who went off early on in the wetter conditions, by more than 1.3 seconds as the Manor Marussias again qualified slowest of all 20 cars.

Both McLarens and both Red Bulls will be hit with grid penalties for unscheduled engine changes this weekend, so will drop to the back of the grid when it is finalised.